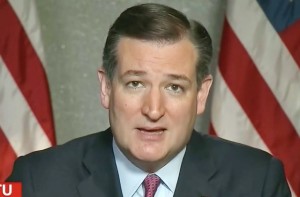 Sen. Ted Cruz has taken up the cause of keeping the words “illegal aliens” in the discourse so as not to allow “political correctness” to score a win.

Cruz returned to the Senate last week, but almost immediately announced he would be taking this week off, during which time, Politico notes, he would “miss votes on Zika funding legislation as well as appropriations bills.”

On the way out, apparently, Cruz co-signed a letter to the Library of Congress arguing that a recent decision to “eliminate the terms ‘illegal alien’ and ‘alien’ wrongly puts political correctness above the rule law.”

The @librarycongress should base its decisions on sound judgment, not political correctness. https://t.co/MDpVcxgMcw pic.twitter.com/dXPmCP9USY

Salon‘s Sophia Tesfaye provides some context for the letter:

The American Library Association recently petitioned the nation’s library to instead use terms term like “noncitizens” and “un-authorized immigration” to describe undocumented immigrants in search terms and cataloging. In March, the library said the term “illegal alien” had “taken on a pejorative tone in recent years” and that it could in fact refer to those from another planet.

On Monday, House Republicans on the Appropriations Committee, upset by the library’s change, reinstated the use of “illegal alien,” arguing that the library had overstepped and had privately acknowledged its error.

Joined by Senator Jeff Sessions of Alabama and two Texas congressman, Cruz’s letterto the library condemned the change of the offensive terms and called on the library to immediately revoke all changes.

“These terms are legal terms of art that have been enacted into law by Congress. If individuals want to revise terms in the United States Code, they can only do so by passing legislation,” Cruz and his colleagues wrote.

The letter follows an unsuccessful bid for the Oval Office, punctuated by an ominous final campaign ad indicating that 2016 would not be the last word on Cruz’s presidential ambitions.