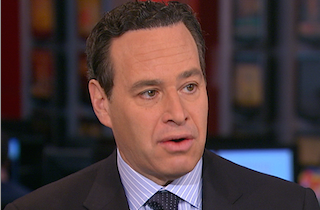 As the news out of Iraq gets worse and worse, a cavalcade of Bush-era hawks have been coming out of the woodwork to defend continued U.S. military action in that country. Look, there’s Paul Bremer on Morning Joe advocating that we “double down” on Iraq. And here’s Bill Kristol calling for air strikes on that same show. And don’t forget Paul Wolfowitz refusing to admit mistakes on CNN’s New Day.

But now there is at least one member of George W. Bush’s inner circle who thinks an Iraq War revival is a bad idea: David Frum. In a new column for The Atlantic titled “Iraq Isn’t Ours To Save,” Bush’s former speechwriter argues that the U.S. should stay out of the crisis in Iraq and instead let Iran take the lead.

“I was a strong supporter of the Iraq war,” he writes. “Now I urge caution about military action against the Islamic State of Iraq and Syria (ISIS) insurgency in the country.”

While Frum says that U.S. intervention to protect allies “remains essential,” he adds, “the government in Baghdad is not an American friend, and action against ISIS will not advance U.S. interests.”

If Frum sees any hope in Iraq, it lies with the Kurdish faction, which could succeed in carving out an autonomous state for themselves:

“The United States overestimated the threat from Saddam Hussein in 2003. Without an active nuclear-weapons program, he was not a danger beyond his immediate vicinity. That war cost this country dearly. The United States failed in its most ambitious objective: establishing a stable, Western-oriented government for all of Iraq. It did, however, succeed in establishing a stable, Western-oriented government in a part of Iraq: Kurdistan. Let’s focus resources instead on strengthening our relationship with that impressive enclave—and hope that as much as possible of Iraq’s oil wealth ends up under Kurdish control.”

Before the latest flair up of violence in Iraq, Frum appeared on HBO’s Real Time where host Bill Maher confronted him about driving America into war back in 2002 and 2003. While he did not admit regrets at that time, it appears he is not eager to make the same mistake twice.