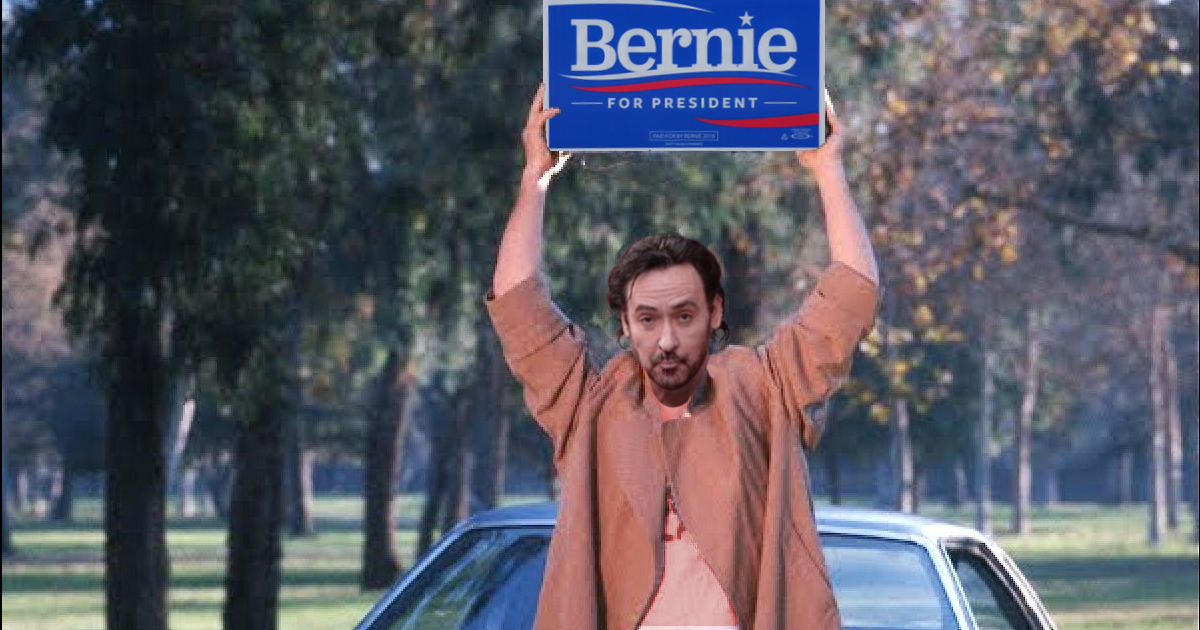 Actor John Cusack, star of films like Say Anything and Con Air, caused an uproar this weekend by targeting several critics of Bernie Sanders, including former Hillary Clinton and Barack Obama policy adviser Neera Tanden. Tanden did not take Cusack’s guff for one second.

Cusack, who is a longtime Sanders supporter, tweeted a list of Sanders’ Twitter critics, and asked if they would support the Democratic nominee, no matter who it is. He included seven Twitter handles, but without the “@” symbol that would alert them to the tweet:

I’m sure all will agree to support whomever the dem nominee is
Whether it is –
warren
sanders
Brown
klobuchar
Harris –
Or any other
Wouldn’t these folks agree ?
MrDane1982, Bravewriting, NotCapnAmerica, SallyAlbright, Patrickesque, NeeraTanden, CandiceAiston.
Be honest –

Or does that goal rule apply for everyone -but one ? Be honest – I’ll respect the honesty – https://t.co/w45cqUoeXs

Tanden, who is currently the president of the Center for American Progress, responded quickly to Cusack’s tweet, which she called “completely offensive”:

And I used to love your movies. Really sad.

In fact, Tanden has some experience at getting over a rough primary. In 2008, she went from Hillary Clinton’s policy team to Barack Obama’s after Obama secured the nomination, and helped elect him to the presidency.

Cusack did generously retweet another user’s devastating own, along with the clever rejoinder “Not”:

In fact, “Bernie or Bust” was the 2nd most-searched political slogan during the 2016 Democratic National Convention. “I’m with her” was number one.

Another odd feature of Cusack’s tweet is that aside from Tanden, none of the people listed are exactly household names in politics, which led some to conclude he was targeting them for harassment by his 1.6 million followers:

Bless your heart. Reduced to trolling the internet targeting nobodies like me for harassment to impress a bunch of kids who weren’t even alive when you were famous.

My 17-year-old self weeps over who you turned out to be ? #NeverBernie https://t.co/XVpQykgqnL

Tanden is the only blue checkmark on the list, and the follower count of Cusack’s targets range as low as 10,000. And Cusack has at least one of the accounts he tweeted at blocked, so the point doesn’t appear to have been good-faith engagement.

Others, including Neera Tanden, wondered where Cusack got his list of names:

Totally seems that way to me. I wonder who sent it to him?

Whatever Cusack’s intention (maybe he was jealous of all the attention Rob Lowe was getting this weekend), I suppose he can Say Anything he wants, but I don’t think his list of Twitter villains is going to end up having to agonize over Bernie Sanders as the Democratic nominee.

Recent polling shows a wide-open field for Democrats, and even with strong lingering support from 2016, Sanders is losing ground fast. A Washington Post poll showed most Democrats without a clear favorite, and among those who offered a name, Sanders placed a distant third behind Joe Biden and Kamala Harris. A more recent CNN poll showed Sanders trailing Biden, and closely bunched with Harris and Elizabeth Warren.

If or when Sanders does enter the race, he won’t be facing a single candidate who wants to be careful not to alienate his supporters, he will face a wide field of candidates, some of whom will be prepared to unleash the kind of negative campaigning that he largely avoided in 2016. And Bernie lost in 2016.

In this way, Sanders may become a victim of his own success, because while he managed to make the Democratic platform more progressive in 2016, he has given the 2020 crop a lot more room to get granular with their criticisms of his policies.

Biden, too, is coasting on a wave of goodwill from his tenure as Barack Obama’s vice president, but his shine figures to dull considerably once there are people actually campaigning against him.

And finally, Sanders would need to expand his appeal among minority and women voters, in a field that is chock full of more appealing and diverse candidates, and on a primary calendar that’s a lot less friendly to him than the last one.

Here’s hoping that whoever the nominee is, their celebrity fans don’t go around punching down at non-celebrity critics on Twitter. I think we’re safe so far.