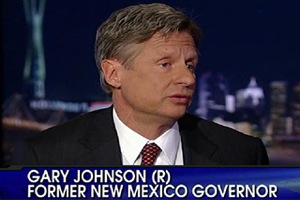 Johnson, who was “flattered” when Texas Republican Congressman (and father of Rand) Ron Paul suggested him as a possible 2012 candidate in his stead, told the Wall Street Journal that it was people like Rand Paul who made him strictly keep to the Republican label: “This is probably why I’m a Republican, because maybe I would not toe the [libertarian] line,” adding, “I’d like to think I would have signed the civil rights bill and wouldn’t have had any issues with it.” He then suggested privatizing parts of Social Security, taking the state out of marriage, legalizing some illegal drugs (his trademark issue), and admitted to voting for the Constitution Party candidate in the last presidential election. Nope, not a libertarian at all.

In the meantime, Paul was busy putting lipstick on his own pig: “I choose to use a different phrase to describe my beliefs — I consider myself a constitutional conservative, which I take to mean a conservative who actually believes in smaller government and more individual freedom.” So, again, he just believes in minimal government and maximum individual freedom, neither of which have anything to do with libertarianism.

Actually, unlike Johnson’s obvious attempt to stay as far away from Paul as possible. Paul may be right— unlike his father, he does not enjoy as much widespread support among libertarians, and he holds a few beliefs that ruffle most feathers in the less authoritative sector of the right wing. In fact, the Libertarian Party of Kentucky almost ran a candidate against him for his views on same-sex marriage, abortion, and national security, among other things. The only issue libertarians truly supported him on, it seems, is his belief that private businesses have a right to serve whoever they choose.

And that’s precisely the belief Paul and Johnson are running away from. During the Civil Rights Act PR disaster, liberal cable news personalities like Rachel Maddow and Chris Hayes took on Paul’s statements and painstakingly linked them to libertarianism as an entire philosophy. It wasn’t very hard, as some of the most prominent voices in the libertarian movement— from far-right libertarians like John Stossel to the so-called “left-leaning” libertarians like Dave Weigel— came running to Paul’s defense thinking him to be loyal to their ideology, and fleshing out nuances that Paul himself neglected to. They were wrong; Paul did a hatchet job on the libertarian moniker and now refuses to take responsibility for it. In response, some libertarians (like Gary Johnson) find themselves doing anything possible to thicken the line between Paul’s views and their own. For the sake of their ideologies, libertarians should be hoping many more will come around to realize that it’s Rand Paul’s bumbling interpretation of his beliefs, and not the beliefs themselves, that they should be running from.