Former Romney Adviser: Having a Baby Is Like Driving a Porsche

Former Romney Adviser: Having a Baby Is Like Driving a Porsche 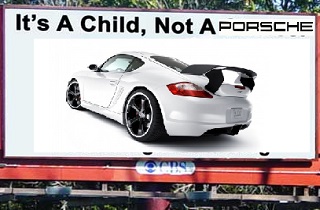 There is literally no limit to the lengths conservatives will go to in order to oppose the idea that they thought of, but now hate because President Obama enacted it. If you doubted the derangement of Republican reaction to Obamacare before, consider this: the party whose defining social issue is the abolition of any sort of reproductive planning or control is now arguing that Obamacare is bad because it’s not a child, it’s a choice. And it’s not even an important choice.

To be fair, it’s not the entire Republican Party, just a senior adviser to their most recent presidential nominee (his name was Mitt Romney) and most recent presidential President. As some conservatives continue to push the dim-witted talking point about being “forced” to “buy maternity coverage,” former Romney economic adviser Greg Mankiw explains why it’s cool for insurance companies to leave greedy bitches holding the bag for maternity care:

In the law, having children has been deemed a pre-existing condition, although it is not quite described as such. Everyone is now expected to buy insurance to pay for pregnancy and maternity care, even those who never intend to have children. The goal is to spread the risk of childbirth among the larger community.

But having children is more a choice than a random act of nature. People who drive a new Porsche pay more for car insurance than those who drive an old Chevy. We consider that fair because which car you drive is a choice.  Why isn’t having children viewed in the same way?

Well, he’s got a point there; from what I’ve heard, it kinda feels like a Porsche going through a Habitrail on the way out. Aside from the fact that babies aren’t driven around by overcompensating douchebags who park them diagonally in two parking spaces, I’m stumped. What say you, Salon‘s Joan Walsh?

The battle over the ACA’s baseline insurance provisions exposes the bottom line of the modern GOP: I will defend to the death your right to be gouged by your insurance company, so you can either go bankrupt when it doesn’t pay your medical bills, or go the ER and stick taxpayers with the bill. All the angst about changes in the private insurance market reveal why overhauling the insurance system has been so problematic, forever: it’s heavily premised on gambling and wishful thinking. Some people gamble that they won’t get sick, so they go without insurance entirely. Or they hope they won’t need hospitalization, so they go with cheap plans that cover almost nothing. Of course, when those people bet wrong, society covers their costs via emergency room visits, or they pay themselves and many go bankrupt.

On the issue of maternity care, specifically: Women who buy policies that don’t cover it are gambling that they won’t become pregnant, or that they can pay full freight themselves if they do – and plenty of them bet wrong. Of course, Mankiw’s response would presumably be something like the 1970s TV detective Tony Baretta’s: Don’t do the crime if you can’t do the time.

I would only add that insurance companies just won’t offer maternity coverage at all if you don’t make them, but Walsh’s broader point is undeniable: Obamacare is the ultimate Jedi mind trick on conservatives, capable of twisting them into any ideological balloon animal you can think of. When the website was a fustercluck, Republicans were suddenly desperate to sign people up for Obamacare. The President should start adding everything he wants to Healthcare.gov so Republicans will insist it all starts working immediately. Why can’t illegals get their citizenship at Healthcare.gov? Why can’t law-abiding Americans register their firearms? THANKS, OBAMA!