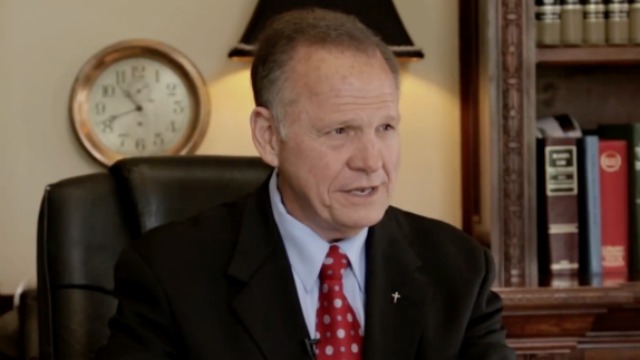 A new report out today contains four women who claim that Alabama senate candidate and former state Supreme Court chief justice Roy Moore pursued relationships with them while they were teenagers. One of them claims that the two had sexual contact.

The Washington Post spoke to one of the accusers, who said she was 14 years old when Moore — then 32-year-old assistant district attorney — struck up a relationship with her. Leigh Corfman said Moore seemed friendly with her at first, though it didn’t take long before that changed:

On a second visit, she says, he took off her shirt and pants and removed his clothes. He touched her over her bra and underpants, she says, and guided her hand to touch him over his underwear.

“I wanted it over with — I wanted out,” she remembers thinking. “Please just get this over with. Whatever this is, just get it over.” Corfman says she asked Moore to take her home, and he did.

WaPo spoke to three other women who recently claimed that Moore made advances towards them while they were between the ages of 16 and 18. These women said Moore didn’t force them into any kind of sexual contact, though they also thought Moore’s pursuit was “troubling” in retrospect.

Shortly after WaPo released their report, Breitbart released a statement from Moore’s campaign team, saying the allegations about his conduct are “completely false and are a desperate political attack by the National Democrat Party and the Washington Post on this campaign.” The statement went on to say the “garbage” report was “the very definition of fake news and intentional defamation,” and that the allegations would’ve turned up earlier in Moore’s political career if they were true.

Moore is known to have a favorable relationship with Brietbart chief Steve Bannon. Bannon appeared with Moore to support his bid for the senate, putting him at odds with President Trump‘s support for Luther Strange.

JUST IN: Roy Moore campaign responds to “the most outlandish attacks on any candidate in the modern political arena” pic.twitter.com/JAX0kg0HeC