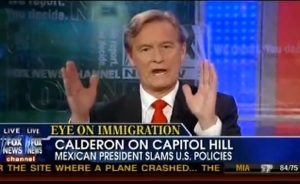 Yesterday, Mexican President Felipe Calderon spoke to a joint session of the US Congress and railed against the controversial immigration law recently passed in Arizona. Democrats in audience rose to applaud after Calderon critiqued the law which did not please the hosts of Fox and Friends one bit, and made some strong point critiquing Calderon’s comments – namely that he got it wrong when he said that “racial profiling is the basis of the law.”

Host Steve Doocy summed up the “big doings” yesterday thusly: “Mexican President Felipe Calderon went to the well of the house, stood there in front of everybody, told a gigantic lie, and the Democrats in the House and the Senate gave him a standing ovation.” Calderon’s comment that the law is “introduces the terrible the idea of racial profiling as a basis for law enforcement” does not appear correct; the law specifically forbids the racial profiling, though some have argued that the spirit of law is not in line with the letter of the law.

Host Gretchen Carlson was so outraged by this story that she went so far as to suggest that politicians running for office in November might want to use this footage in their political ads in the Fall. An interesting suggestion, that is certain to be followed by Republican candidates (since very few of them were giving the standing ovation.)

Fox and Friends: your daily source for American pride, outrage and sound political advice for the coming mid-terms!