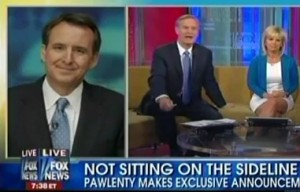 To paraphrase a popular Zen koan, what is the sound of champagne corks not popping at Mitt Romney’s campaign headquarters?

In a Fox and Friends Exclusive, former GOP hopeful Tim Pawlenty (R-Mn) has officially endorsed Mitt Romney‘s presidential bid, which could be the clearest case of subtraction by addition since the first time someone put Miracle Whip on a sandwich. To the extent that anyone noticed Pawlenty’s campaign, it was for his attack on Romney over health care, and his spectacular failure to say it to Romney’s face at a debate in June.

Lending his 9-volt charisma to a campaign that’s already generating the excitement of dry wheat toast, Pawlenty manages to describe Mitt Romney, a candidate plagued with a “flip-flopper” reputation, as a “turnaround guy”:

According to Politico, though, Romney now passes the Pawlenty health care muster, which, if I’m not mistaken, is the first example of a flip-flop²:

Asked how he could endorse a candidate who he once mocked as the author of “Obamneycare,” Pawlenty said he’d spoken about health care with Romney and concluded: “Mitt Romney is 100 percent dedicated and committed to repealing Obamacare.”

Pawlenty also wisely nipped the inevitable clamor of the conservative masses in the bud by preemptively turning down the vice-presidency. “”I’m not going to consider being VP. I was down that path once before with John McCain.”

That’s really a shame, though. We could probably light several cities with the energy those two would conserve.

The real shame, though, is Tim Pawlenty’s flame-out. He was supposed to be the guy who could leverage the Romney/Huntsman “sanity” vote, while crossing over to appeal to social conservatives (and picking off a few Trekkies with his Vulcan-sounding nickname). Instead, he was unable to get either crowd to notice him, and Republicans can now only choose between a primary candidate who may be unelectable, and an electable candidate who probably can’t win the primaries. The media can share a decent helping of the blame here, as they not only focused on Pawlenty’s style over his substance, but they have also quickly shoved Michele Bachmann, Ron Paul, and everyone else overboard in their zeal to make this a two man race. It’s September, for crying out loud.