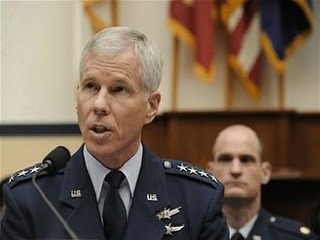 Solyndra II? At a classified briefing, head of the Air Force Space Command Gen. William Shelton informed House members that he had been pressured to change prepared congressional testimony in order to better compliment a Virginia-based satellite and communications company funded by major Democratic donor Philip Falcone. The GOP has been wondering for some time now whether work done by that company, LightSquared, has been “unduly expedited” by the Obama administration in its push for nation-wide wireless network upgrades.

As Shelton sees it, the company’s plans for its national 4G phone network would seriously compromise the effectiveness of high-precision GPS receiver systems used by the military, given that its spectrum would be about 5 billion times stronger than the military’s GPS system.

Appearing before the House Armed Services subcommittee yesterday, Shelton alleged that he’d repeatedly been pressured to say that “the interference problems could be mitigated” and that he’d been “asked to say things I didn’t agree with.”

FoxNews.com ventures that this alleged pressure may have come directly from the top:

It’s unclear who exactly pressured Shelton, but it’s possible the culprits are in White House, Department of Defense or the Office of Management and Budget, which each approve military testimony prepared for Congress. The House staff member also told Fox News a copy of Shelton’s prepared testimony was leaked to LightSquared.

The Pentagon did not respond to Fox News’ requests Thursday evening to comment for this story, though a spokeswoman for Shelton told the Washington Post that there was no improper influence on the general’s testimony. The Post also reported that the White House denied trying to influence Shelton’s testimony.