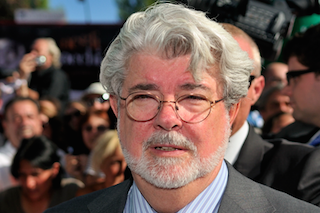 Since the first teaser for Star Wars: The Force Awakens was released the day after Thanksgiving, it has quickly become one of the most-watched movie trailers in YouTube history, racking up nearly 53 million views in the first three days alone.

But one person who somehow hasn’t seen it yet is Star Wars mastermind George Lucas.

The New York Post’s Page Six caught up with Lucas this week and asked him what he thought of the first new Star Wars footage to be released since he completed the third prequel, Episode III almost 10 years ago.

“I don’t know anything about it,” Lucas told them. “I haven’t seen it yet.”

But isn’t he at least curious? Pressed for an explanation, he said he didn’t want to watch it yet “because it’s not in the movie theater. I like going to the movies and watching the whole thing there. I plan to see it when it’s released.” The trailer was shown in 30 movie theaters across the country over Thanksgiving weekend, but the full film does not come out until December 2015.

Lucas does have a writer credit for creating the characters in the new Star Wars installment, but otherwise has not been involved much in the process since selling the franchise to Disney. That company tapped J.J. Abrams to direct Episode VII and oversee the rollout of the two films that will follow it.

Just in case George Lucas ends up on this page, he can watch the 88-second Star Wars: The Force Awakens trailer below, via YouTube: