George Will: Ahead Of Midterms Dems Can Only Envy Tea Party Energy
video

George Will: Ahead Of Midterms Dems Can Only Envy Tea Party Energy 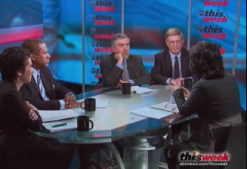 With the midterms almost (finally) upon us the possibility of a GOP dominated Congress highly influenced by a possible influx of Tea Party candidates is becoming a reality. Should the country be worried? Should the GOP? Moreover, does the Tea Party even matter when there is so much anonymous big money sloshing around this election cycle.

On the This Week roundtable today George Will argued that the Tea Party is, in fact both important and authentic.

The fact is, the Tea Party is, as I’ve said here before, an enormous net benefit to the Republican Party, because it’s brought out an energy that the Democrats can only at this point envy… I don’t think they’re irrational at all. I don’t think that the Tea Party is doing anything other than asserting something deep in the national political DNA, that is, a suspicion of the central government and a belief in limited government.

Tavis Smiley, meanwhile, not only had very little sympathy for Christine O’Donnell — “let’s be clear: She got herself in this mess” — but thinks the Tea Party is only going to make things more difficult for the GOP and that their tactics should be questioned:

I don’t want to ignore the angst of the Tea Party. This economic angst that they feel, many of us feel, so this is real. But their tactics ought to be questioned, number one. The candidates they’ve put forth aren’t the best candidates, I think, in the long run. And most importantly these Tea Partiers are probably somewhere sipping tea when the last administration was running up these deficits? They all of a sudden show up now. And, again, I don’t want to underestimate their concern and their issues, but where were they when the deficit was being run up by the last administration?

And does the Tea Party matter at all amidst all the big anonymous money everyone’s been discussing this week? Interestingly, Paul Krugman didn’t appear to be that upset about the idea of foreign money influencing America’s elections mostly because he seemed to feel it was just business as usual.

Things haven’t changed as much as — as the story suggests. We had the Chamber of Commerce, which draws in an enormous amount of money from multinational corporations. Some of those multinational corporations have headquarters in the United States; some of them have headquarters in other countries. It hasn’t mattered. It’s the — the fact that some of them have headquarters abroad is not the important point. The point is that, actually, this is a huge amount of money from people who don’t have that much of a stake in the things that American voters care about.

You can watch the whole segment below. Hard to miss the conclusion that no matter how endlessly the pundits discuss the Tea Party or speculate on the outcome of November’s elections, no one has any better idea of what is going to happen next month than they did 12 months ago.