‘Get Something or Give NOTHING’: Bernie Supporter Killer Mike Tells Black Voters to Stay Home

‘Get Something or Give NOTHING’: Bernie Supporter Killer Mike Tells Black Voters to Stay Home 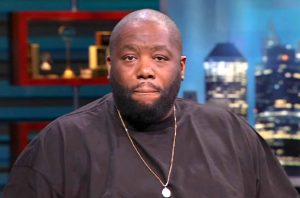 One of the things that has plagued Hillary Clinton’s campaign in the aftermath of a contentious and close Democratic primary has been getting Bernie Sanders supporters on board. In recent weeks, well-known Bernie surrogates such as Susan Sarandon and Nina Turner have reiterated that they are not supporting Clinton, with Sarandon going so far as to endorse Green Party candidate Jill Stein a week out from Election Day.

Black Voters in states like Georgia this is your chance to MAKE A DEMAND and have it met! Don't remain a pasty and pet simply doing what u are told. Get something for your vote or stop complaining and accept your role as a 2cd Class citizen once and for all. #VoteLocalifUMust #IamVotingLocal

Yep, the rapper told African-American voters to “stay the f*ck home” if they don’t feel the politicians on the ballot can promise weed decriminalization, allowing ex-felons to legally make money off of selling marijuana and placing two black justices on the Supreme Court.

As one would expect, there was some pushback on Killer Mike’s message.

Georgia is on the verge of shaking things up and Killer Mike tells his fans not to vote. Unbelievable.

Speak for yourself! Ppl died for the voting rite and you sound ridiculous! You need a reality check and fast! https://t.co/im1zpyPfYp

.@KillerMike If people stay home, media will play it as "apathetic." Vote 3rd party or submit a blank ballot so they can't say that.

Yeah I was totally laughing AT Killer Mike. Don't ask folks not to vote. Just make your decision.

Meanwhile, Killer Mike responded to some of his critics on Twitter, stating that he was urging people to vote local and that he wants more for black voters than a pat on the head from Democrats.

Easy here we go If I am a woman I won't vote pro life. If I'm gay I wud only vote for those that believe in Marrige equality. Get it, stupid https://t.co/t2LeFgGfSd

Then yo have never been lied to set up and robbed https://t.co/R49TV13gRr