Glenn Beck: Is Google Just A Shill For The United States Government? 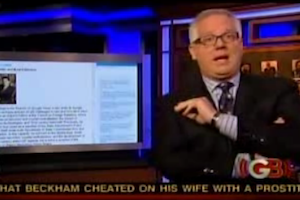 Last week, I accused Glenn Beck of pandering to older viewers in his attacks on social media and Google. It now appears that there was more going on and that Google has found their way amongst the show’s Rogues Gallery, nestled amongst the Weather Underground and the Muslim Brotherhood. On today’s show, Beck advised his audience, as he always does, to do their own homework. However, tonight he told them they probably shouldn’t use Google.

This all stems from Jared Cohen, a man who works for Google after a stint with the State Department. Cohen co-founded the Alliance of Youth Movements which held summits helping groups use social networking and other modern techniques to inspire the youth to get involved in activism around the world. This follows the aforementioned expose Beck did last Friday on Google’s Wael Ghonim. Beck wasn’t happy with anyone involved in the AYM summits (including a number of television networks) but especially didn’t seem happy with Google. He instructed his audience to begin keeping a watchful eye on everyone involved.

“I would look into all the people the State Department are working with; MSNBC, CBS, gosh, MTV. Maybe we should start watching those networks a little bit and seeing what their news coverage is like. Who are these groups? Who are they? Are they right, are they left, are they clean, are they dirty, are they front groups? I don’t know. May I recommend, if you’re doing your own homework, don’t do a Google search. Seems to me that Google is pretty deeply in bed with the government. Maybe this is explaining why Google is being kicked out of all the other countries? Are they just a shill now for the United States government? Who is Jared Cohen? Is he private citizen or government operative? And isn’t this the second Google guy we’ve found? This is the second Google executive now being exposed as an instigator of a revolution. Are you comfortable with the government partnering covertly with media organizations, search engines, and social networking so they can bring change that the Washington elites have designed?”

Wait, everyone, be quiet. Do you hear that noise? Right there. That one. That’s Yahoo saying “thank you.”