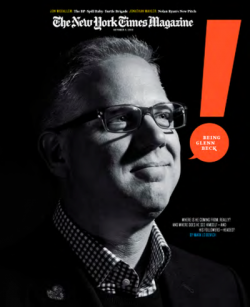 Glenn Beck has landed the cover of the New York Times Magazine. If there is a greater measure of mainstream acceptance (dare we say legitimacy?) in the media I can’t think of what it is, other than perhaps a full hour on Oprah. It also marks a turning point of sorts, I think. Message being: Beck has arrived on the top floor, but can he stay there.

The profile, penned by Mark Leibovich, is less revealing than a nice sort of summing up of the Beck phenomenon for Times readers who only know Beck from the periphery or as a common reference point (correct or otherwise) to illustrate the more extreme elements of the conservative movement. Essentially this is the NYT answering the question: who was that guy who just got 350,000 people to show up on the National Mall and started talking about God and individual responsibility. Here are a couple of highlights:

Fox And Beck – All is not lovey dovey

[Roger] Ailes, who declined to comment for this article, has generally been supportive of Beck. But he has also been vocal around the network about how Beck does not fully appreciate the degree to which Fox News has made him the sensation he has become in recent months. In the days following Beck’s Lincoln Memorial rally, which by Beck’s estimate drew a half-million people, Ailes told associates that if Beck were still at Headline News, there would have been 30 people on the Mall. Fox News devoted less news coverage to the rally than CNN and MSNBC did, which Beck has pointed out himself on the air…When I mentioned Beck’s name to several Fox reporters, personalities and staff members, it reliably elicited either a sigh or an eye roll. Several Fox News journalists have complained that Beck’s antics are embarrassing Fox, that his inflammatory rhetoric makes it difficult for the network to present itself as a legitimate news outlet. Fearful that Beck was becoming the perceived face of Fox News, some network insiders leaked their dissatisfaction in March to The Washington Post’s media critic, Howard Kurtz, a highly unusually breach at a place where complaints of internal strains rarely go public.

Women tune into Beck’s radio show more heavily than they do to other conservative commentators, says Chris Balfe, the president and chief operating officer of Mercury, which employs more than 40 people. And Beck’s television show is on at 5 p.m. Eastern, traditionally a slot with more women viewers…But Beck also appeals to a more traditionally female sensibility. “He works through things in real time,” Balfe told me. “Maybe he’ll come back tomorrow and say, ‘You know what, I’ve given this some thought, and here’s what I’m thinking now.’ ” Or maybe he’ll come back sooner. Within a few sentences of proposing Obama’s “deep-seated hatred for white people,” he added this caveat: “I’m not saying that he doesn’t like white people.”

Beck’s staff and loyalists love to compare Beck with Oprah Winfrey [also us…a year ago]…As Winfrey does, Beck talks a great deal about himself and subscribes to the pop-recovery ethic…The presumed Oprah parallel is corporate as well as stylistic. Beck, like Winfrey, has a knack for making best sellers of books he mentions on the air. He publishes a magazine, sells more than a million dollars in merchandise and speaks of an array of possible multimedia ventures….Beck himself is a study in fusions. He blends TV-ready empathy with push-the-edge conservative talk, as well as self-doubt with the self-absorbed grandeur of a man whose hard-won recovery grants him the power to speak from the steps of the Lincoln Memorial.

He even enrolled at Yale, with a written recommendation from an alum who was a listener at the time, Senator Joe Lieberman. He took one class, early Christology, but says he “spent more time trying to find a parking space” than in class and quickly dropped out.

“If you were in an imaginary meeting for a TV show,” Bill Shine, Fox News’s programming director, says, “and someone said: ‘I have an idea. Let’s spend a month talking about the founding fathers and get a bunch of pictures of Benjamin Franklin and hang them up,’ you’d be like, ‘What?’ But it works.