Beck On Olbermann: “Your Father Would Be Dead By Now” With Obamacare 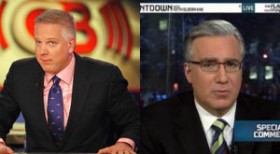 Keith Olbermann is going through some tough times: his father is dying, and his father wanted to die. It was a powerful statement Wednesday, replete with details and emotion and just the right amount of political grandstanding that makes Olbermann one of the most powerful left-wing talents on cable news. Most were driven to compassion. Glenn Beck was mostly disgusted.

On Friday’s edition of his radio program – which, as we’ve noted before, can be even more over-the-top than his TV show – Beck and his pals Stu Burguiere and Pat Gray took Olbermann to task for regularly criticizing the health care system that saved his father’s life, and glorifying one which would have left him to die. “This very government,” Beck said, “Barack Obama, talked about should his mother have hip replacement surgery…your father would be dead by now, and maybe your father would agree with it at this point, that he should have been left to die, but thank God it is still his choice.”

He and his crew did not refrain from outright mockery while addressing Olbermann himself, however. Most of the laughs surrounded Olbermann’s reference to Sisyphus rolling a stone up a mountain for all eternity in Greek mythology, with a few snickers here and there at the fact that Olbermann would let the audience in on some of the more gory details of his father’s illness. But Beck makes a point of separating his father as a person from the fact that the elder Olbermann is now a prop his son is brandishing at his political enemies as a human shield in the health care debate.