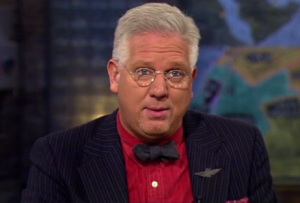 Glenn Beck has been growing more and more frustrated with the “establishment GOP hacks,” and on Thursday he unloaded on them for trying to destroy the tea party by sharing a personal anecdote about a literal coup that happened at the conservative group FreedomWorks that he helped bring to an end.

Beck did not refer by name to the person who ran the coup (who later called him hoping for support), but based on the context and the scant details that had already been reported, he was clearly referring to how Dick Armey attempted an actual coup at FreedomWorks in order to clear out the more libertarian-minded people like the group’s president Matt Kibbe.

Beck spoke to Kibbe, who said he was escorted out by armed guards, and thanks to Beck and a bunch of other people threatening to expose what they’ve done, the coup ended and the board reinstated everyone who was let go. This happened over a year ago, but Beck brought it up now because he believes the GOP is doing the same thing to the tea party.

He warned that so long as establishment-types continue to run the show, “conservatives and America will keep losing,” and predicted that in the future, people like Ted Cruz will “be the most beloved members of the new Republican party or whatever it’s called, because the old one is going to go the way of the dinosaur.”