Glenn Beck Stands By His Comments On Protesters: ‘It Ends In Violence With Marxists Every Single Time’ 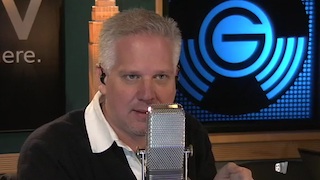 Quite a lot has been said about the Occupy Wall Street protesters both positive and negative but it’s unsurprising that Glenn Beck’s comments from yesterday quickly went viral. Out of everything that’s been said, warning that the protesters would “drag us out into the streets and kill us” kind of stood out. Today on his show, Beck spoke about the outcry over his comments. However, he didn’t budge, steadfastly standing by what he said.

At first it seemed like the segment would take a different track as co-host Pat Gray began accusing those in the media of misconstruing what Beck said. However, Beck didn’t seem to want to play along. While he agreed with Gray that he meant that the situation would spiral into violence instead of happening right away, when Gray gave him the “out” that he didn’t mean the “idiots in the park” specifically, Beck countered that, no, he did mean some of them.

Beck then compared everyone disregarding the seriousness of the situation to Ray Nagin before Hurricane Katrina and said that listening to those people was “dangerous to [his listeners’] survival.”

He explained that the dangerous people were Marxists and then listed the violence that had been perpetrated by Marxists in the past. And he explained that, after studying the man for three years, he could say with certainty that President Obama was a Marxist as well and that the people he surrounded himself with were dangerous revolutionaries.

Watch video of Beck’s comments below: