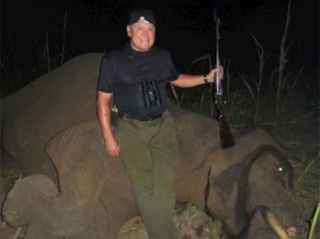 Bob Parsons, the CEO and founder of web hosting site GoDaddy.com, recently went on a hunting trip in Africa, which is something rich people do. While there, he shot and killed an elephant and then posed with it. He taped the whole thing as well as footage of the local visitors chopping the elephant’s body up while wearing bright orange “Go Daddy” hats. Upon his return, Parsons linked to the video on his Twitter, saying, “Here’s my vacation video. Enjoy.” He probably thought people would get a kick out of it. However, he forgot one important thing; it’s a video of him shooting and killing an elephant.

Now, Parsons wasn’t just running around shooting at nature’s glorious beasts all willy nilly. At least, that’s not how the video depicts it. In the footage, it’s explained that the pack of elephants are eating all the crops of the local villagers and, thus, need to be weeded out. Parsons pointed this out in his response to the uproar that’s been boiling since the video was uploaded.

From the New York Daily News:

“Parsons said his detractors were missing the point.

‘I think everyone’s heart is in the right place, but they are missing that things are different over there,’ he said. ‘If they had an animal destroying their livelihood and they were going to starve to death … they’d look at it differently. And that’s the situation in Zimbabwe.’

The ex-Marine and Vietnam veteran called his critics ‘a small but vocal minority’ and said he wasn’t worried about losing customers.

‘I helped the farmer protect his field, and I fed a lot of people,’ Parsons said.”

Even if that’s true, Parsons is the one that made the mistake. I’m not talking from a ethical or moral standpoint but purely from a PR one. When Americans see an elephant, they don’t think pesky eating machine that’s destroying people’s livelihoods. They see an adorable animal that always looks sleepy, stands on two legs to entertain at a circus, and hallucinates in an old Disney movie. Even if you needed to kill that elephant, bragging about it on the Internet isn’t a good idea for your company.

Here, I’ll give you an example. Lets say there’s a golden retriever puppy, only this puppy is evil. Like really evil. Like he’s got red eyes and could beat Cujo in a fight evil. Like he’s so evil that he was the one who green lit Jersey Shore evil! He’s really freaking evil. Anyway, let’s say this super evil dog tied you up, forced you to watch while he murdered your entire family, and then was coming to kill you. Fortunately, however, you get the upper hand and killed him first. While this may be a totally justified example of self defense, you still wouldn’t want to post a picture of yourself proudly standing over the corpse of a golden retriever puppy onto the Internet.

Not at all shockingly, PETA is up in arms, calling Parsons the “scummiest CEO of the year.” Even less shockingly than that, Go Daddy’s competitors have begun taking advantage. The New York Daily News reports that NameCheap.com is offering a discount to anyone who switches over from Go Daddy and that they’ll give a dollar to Save the Elephants for every transfer. Ouch.

Of course, there is one surefire way to get out of this tricky public relations minefield. Go Daddy should release an official version of the video that ends mid way through, telling people to go to their website for a chance at maybe seeing Danica Patrick’s boobs! Everyone likes those commercials, right? Right?

Check out the (slightly graphic) video below: