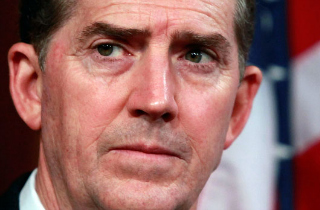 This morning, Sen. Jim DeMint (R-SC), long an ideological leader of the conservative movement in the Senate, announced that he will resign from his seat in January to become president of a conservative think-tank, the Heritage Foundation.

Liberal politicians like Rep. Nancy Pelosi (D-CA) have greeted the news with predictable glee: “He won’t be missed,” she told the press, hitting him especially hard for his staunch conservatism.

But allow me, a non-liberal, to also join in on that glee and say: Good riddance, Sen. DeMint. You represented a large part of what is wrong with the Republican Party and modern conservatism.

What do I mean by that? Well, during the 2010 midterm elections, heavily social-conservative DeMint told Fox News’ Bret Baier that “you can’t be a fiscal conservative unless you’re also a social conservative.”

In other words: If you believe in free markets and limited government, you cannot possibly believe in things like legal marijuana, gay marriage, women’s choice, etc.

Does that make any sense? No.

And yet, having that mix of views was partially what made libertarians and Rep. Ron Paul‘s followers so unpopular with the GOP establishment: They are generally young, socially libertarian, and make no bones about cutting spending on sacred cows like the military.

Sure, DeMint may have been remarkably principled on economic issues, but he was just as much a buffoon on social issues as, say, Todd Akin. DeMint once told a crowd that “if someone is openly homosexual or if an unmarried woman sleeps with her boyfriend, then that person shouldn’t be allowed in the classroom.”

And so it only makes sense for another stodgy conservative troglodyte to ride off into the sunset and find a home at the Heritage Foundation — the heavily partisan, $80-million think tank whose “principled” take on fiscal conservatism ends right at the moment anyone dares suggest we cut a cent from military spending.

So good riddance, Mr. DeMint. Perhaps your departure will open the door for someone with actual principles — someone who believes that the only consistent way to believe in limited government is to want to keep its tentacles out of the boardroom and the bedroom.