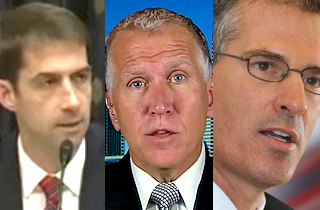 As the expected 2014 GOP wave fails to materialize, one word is increasingly cropping up in races that the party expected to own: “Border.”

Not border as in actual U.S. immigration policy, with which Republicans continue to have an irresolvable hangup, but the border of the fevered conservative imagination, a non-existent anarchic psychospace where anything can and probably already is happening. Ordinarily this fake border — let’s call it B-1A — is where a specific and limited strain of the GOP, best personified by Rep. Steve King (R-IA), hangs out.

But as nebulous threats like ISIS and ebola loom on other, non-contiguous continents, B-1A has bled from the pages of World Net Daily into mainstream campaign statements.

See Arkansas senatorial challenger Tom Cotton‘s statement earlier this week. Cotton, a prime example of someone who should have run away with a senate seat in a GOP wave election, is still battling incumbent Mark Pryor (D-AK). And so we have statements like:

“Groups like the Islamic State collaborate with drug cartels in Mexico who have clearly shown they’re willing to expand outside the drug trade into human trafficking and potentially even terrorism. They could infiltrate our defenseless border and attack us right here in places like Arkansas.”

This ISIS-at-the-border theory has been rebutted numerous times by the Department of Homeland Security, and is based entirely on real-time urban legends like t-shirts mistaken for Muslim prayer blankets and unsourced rumors about “Quran books” being found along border trails. (To say nothing of the fact that ISIS is a regional group in the Middle East.) For Cotton to drag the props of B-1A all the way up to Arkansas marries geographic absurdity with conceptual and evidentiary ones.

Meanwhile other Republican challengers, among them Scott Brown (R-Northeast), warn that not only ISIS but ebola is waiting to infiltrate the border, seemingly because it happens to be The Other Thing in the News Right Now. As Simon Maloy pointed out, for someone with a debilitating virus to make it from west Africa to Mexico and then complete the arduous journey across the border is near impossible, and, per infectious disease experts, “presupposes a suicidal person.”

It’s the gossamer of intent inherent in that last statement that brings us to the strangest but disappointingly inevitable conclusion of the all the border fearmongering: that terrorists will somehow use ebola as a bioterrorism weapon by sneaking it in from Mexico. That seems to be what Thom Tillis, whose failure to leave Senator Kay Hagan (D-NC) in the dust is frustrating national Republicans, was getting at when he warned of “bad actors” bringing ebola across the border.”

Fox News’ Chris Wallace asked the NIH’s Anthony Fauci about such a prospect last Sunday, and the doctor all but rolled his eyes, politely calling ebola an “inefficient” bioterrorism weapon.

But the fact that there’s no evidence such a plot is being hatched, or could even conceivably be executed, is irrelevant, as the ISIS-ebola-border connection was never meant seriously. It’s an idea predicated entirely on juxtaposed headlines, a vortex of fear-based free association, the sole but considerable power of which is that it doesn’t exist, allowing it to take any form a GOP candidate needs in order to frighten that afternoon’s crowd of voters.

Of course if these candidates were really concerned about it, they’d beef up border security. That it’s the current GOP that doomed immigration reform, which contained additional (and largely gratuitous) border security measures, is an irony that will have to wait until after the elections, when the party scaring everybody about the fake border goes back to blocking policies reforming the real one.