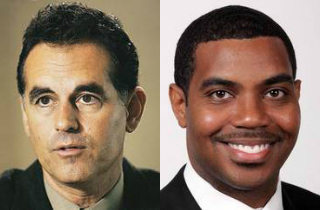 Nevada Republican Danny Tarkanian, who is running for U.S. Congress in Nevada, is taking heat for comments in which he seems to accuse his black Democratic opponent Steven Horsford of pretending to be black.

Last week, Tarkanian told the Las Vegas Review Journal that he identifies with the black voters within his district because of his work with a local sports clinic: “My basketball academy, which is very close to the district, has a lot of players and families in that district that are in our academy now for 10 years.”

Nevada Democrats took issue with Tarkanian’s quote for using what they believed to be “patronizing stereotypes” about the black community.

In response, Tarkanian defended himself before a GOP fundraiser: “They didn’t say what the racist comment was — I’m still trying to figure out what it was.”

He later took shots at his Democratic opponent, who is Nevada’s first black Senate majority leader, saying, “Should we not work within the black community? … We could be like Steven Horsford, who’s not doing anything with that community — and you know, pretend we’re black and maybe try to get some votes if that’s where it is. It’s that extent that they’re going to.”

In a later interview, Tarkanian backtracked his comments, without directly apologizing: “Obviously, I made an inarticulate statement that is being misconstrued right now. What I meant to say now is, it’s clear that Mr. Horsford has ignored the community in the time he’s been a state senator and he can’t expect to get votes from there.”

Horsford replied with a Facebook post: “I know who I am. I will never be judged by the color of my skin, but by the results that I deliver for all people. Tarkanian has proven that he is bankrupt in more than one way, and it’s time he takes responsibility for not only his actions but also his words.”

Watch video of the controversial remarks below, via Las Vegas Sun: