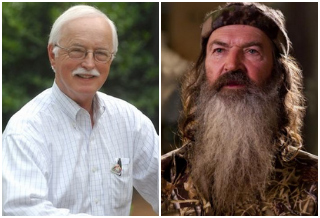 While plenty of conservative politicians have voiced their support for Phil Robertson after the Duck Dynasty patriarch made his controversial comments about homosexual sex, only one is putting words into action. According to The Daily Home, Alabama State Senator Jerry Fielding (R-Sylacauga) is planning to introduce a resolution that would offer Robertson that state’s official and unanimous support.

“Phil Robertson’s family values are shared by the vast majority of Alabamians, who are rightfully concerned by the vitriol aimed at his Christian stance,” Fielding told the local paper. “There’s a clear double standard in the media favoring a liberal worldview. When it’s used to silence and punish Christians for stating their beliefs, that’s when we must defend the rights of individuals to exercise their free speech without fear of politically-motivated repercussion.”

Read an excerpt of the entirely serious resolution below, which states, among other things, that Robertson should be “celebrated as a hero” for his comments:

“Whereas, renown entrepreneur, Louisiana outdoorsman, and reality television star Phil Robertson has positively impacted countless lives through the powerful testimony of his steadfast faith in Jesus Christ and how it has transformed his life; and Whereas Phil Robertson, along with his family, who are featured on the reality television show, Duck Dynasty, have served as ambassadors of the love and grace of the Heavenly Father through their exemplary lives on and off the camera; they have used their fame as a platform to promote wholesome ideals involving family and home life and worship of the Lord; and Whereas recently, Phil has received backlash for expressing his personal views on homosexuality that were based on scripture in the Bible in an interview with GQ Magazine; ultimately, the Arts and Entertainment Network (A&E) punished him for his beliefs and suspended him indefinitely from the reality television show, Duck Dynasty, even though he did not address his views in correlation with the program; and Whereas a portion of the politically correct populous, which strongly encourages tolerance and open-mindedness, is now contradicting themselves with extreme intolerance and close-mindedness towards Phil and his personal beliefs, which stem from his rock-solid Christian faith; and Whereas while Phil does not condone certain lifestyles or behaviors, he issued the following profound statement abounding with love and tolerance: ‘I would never treat anyone with disrespect just because they are different from me; we are all created by the Almighty, and like Him, I love all of humanity’; and Whereas Phil should not be penalized in any way for practicing freedom of speech, but should be celebrated as a hero for courageously revealing his self-truth and Christian ideals in a world that can be unkind towards those with a conservative mind-set; and Whereas Phil Robertson and his family’s admirable stance on marriage, family, and faith reflects the meritorious ideals of the fine citizens of the entire State of Alabama, and it is a tremendous privilege to express our utmost solidarity for them; now therefore, Be it resolved by the Legislature of Alabama, both houses thereof concurring, that this chamber of persons stand united in support of Phil Robertson and his family, and in opposition to the A&E Network’s deplorable action of suspending Phil indefinitely from Duck Dynasty for relaying his Christian beliefs.”