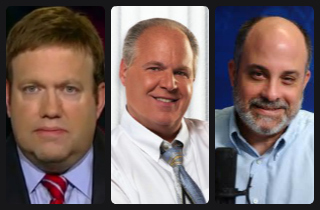 Progressive publication Mother Jones has revealed yet another secretly-recorded video of a Republican saying something newsworthy. This time, it’s of GOP pollster and frequent Fox News analyst Frank Luntz remarking that Rush Limbaugh, Mark Levin, and other right-wing talk radio hosts are “problematic” for the Republican Party’s efforts to reach out to other demographics and to fight the polarization of politics.

The video was recorded on an iPhone while Luntz delivered a College Republicans-sponsored speech at the University of Pennsylvania earlier this week. Most of his speech reportedly consisted of his thoughts on how words matter — for instance, voters respond more positively to “hardworking taxpayers” rather than “middle class” — and how the Republican Party needs to repair its internal divisions in order to maintain control of the House.

One student reportedly asked the pollster about political polarization, leading to Luntz expressing his hesitation to speak frankly on the subject because it could get him in hot water with his own party. After a bit of goading from the audience to continue, it was reported that Luntz asked if anyone was recording the event. One student reporter turned off his device at the request of the pollster, but another student, Aakash Abbi, turned on his iPhone recording application, thus birthing the latest Mother Jones tape.

Transcript of Luntz’s remarks below:

“And they get great ratings, and they drive the message, and it’s really problematic. And this is not on the Democratic side. It’s only on the Republican side…[inaudible]. [Democrats have] got every other source of news on their side. And so that is a lot of what’s driving it. If you take—Marco Rubio’s getting his ass kicked. Who’s my Rubio fan here? We talked about it. He’s getting destroyed! By Mark Levin, by Rush Limbaugh, and a few others. He’s trying to find a legitimate, long-term effective solution to immigration that isn’t the traditional Republican approach, and talk radio is killing him. That’s what’s causing this thing underneath. And too many politicians in Washington are playing coy.”

Watch the tape below, via Mother Jones: