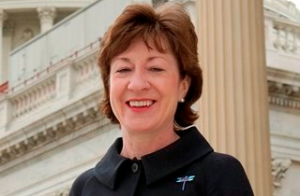 One Republican senator’s opposition to Donald Trump is so strong, she cannot rule out the possibility that she ultimately goes for Hillary Clinton instead.

Maine Senator Susan Collins spoke with The New Yorker‘s Ryan Lizza and trashed her party’s nominee for his racially-charged attacks on a Hispanic judge and his “poorly-thought-out policy plan about banning Muslims from entering this country.”

She says that, like many Republicans this year, she’s “struggling” with what to do because “it’s not like we have perfect candidates from whom to choose in this election.”

But then came the part where a sitting Republican senator did not absolutely rule out backing the Democratic nominee for president:

“I do not anticipate voting for her this fall. I’m not going to say never, because this has been such an unpredictable situation, to say the least.”

I pressed Collins to make sure that she was leaving open the possibility of backing the Democratic Party’s presumptive Presidential nominee over Trump. “That is true,” Collins, who has been a lifelong Republican, said. “But I do want to qualify that by saying it is unlikely that I would choose to vote for the Democratic candidate.”

There have been some Republicans who’ve indicated a preference for Clinton over Trump, but no elected Republican has been this candid about preferring the Democrat in the race.

.@RyanLizza Just to be clear, as Senator Collins said, it is "unlikely" that she would vote for Hillary Clinton. https://t.co/XGJdABQvQl