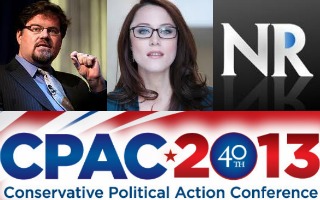 The floodgates are opening. In the wake of the GOP’s devastating loss in the winnable 2012 presidential election – not to mention the party actually losing ground in the Senate, a nearly unthinkable eventuality a year ago – conservatives have little tolerance for groups or individuals who provide sneering progressives with material that allows them to further lampoon Republicans as backward thinking bigots and misanthropes. This common caricature of conservatives is, of course, just that. But, given the willingness of opponents of the GOP and a credulous media to devote outsize coverage to the party’s fringe elements, Republicans have lost a lot of patience for the GOP’s most eccentric members. Enter CPAC, which made news in the last month for all the wrong reasons. CPAC sparked controversy by again blocking gay conservative groups from co-sponsoring the event and making a virtue of not inviting the nation’s most popular governor to attend the conference. Now conservatives are speaking out against the conference which is being increasingly seen as an impediment to the Republican Party’s effort to regain its national appeal.

RELATED: S.E. Cupp Savages CPAC For Blocking Gay GOP Groups: ‘We Should Be Lucky To Have These Guys’

The iconoclastic conservative columnist S.E. Cupp announced this week that she would not attend CPAC for the first time in years due to their decision to again block the gay conservative groups GOProud and the Log Cabin Republicans from co-sponsoring the event.

Appearing on MSNBC on Friday, Cupp explained her refusal to attend the conference this year. “It’s just become increasingly uncomfortable for me to endorse an event that is, in some ways, excluding – and, in many ways marginalizing this core group of gay conservatives,” Cupp said.

Cupp, who spends her days unashamedly advancing conservatism before hostile audiences of MSNBC viewers and college students, saw her concerns dismissed by movement conservatives. By existing outside the echo chamber, her purity, too, is in doubt.

And, who knows? Maybe the conference would have not raised the ire of conservatives eager to refurbish the party’s image and broaden their appeal to new demographics had they only blocked gay Republican groups from sponsoring the conference. After all, this is not a new policy. But they went one step too far when the conference decided not only to not invite New Jersey Gov. Chris Christie to the conference, but to highlight their decision as though they were taking a bold stand.

A bold stand against what? Popularity? Has the GOP Become a coalition of hipsters wherein anything that enjoys broad support must be shunned?

Christie frustrated conservatives when, after his state was devastated by a once-in-a-generation hurricane, he toured the rubble with President Barack Obama just weeks before his reelection. He later lambasted the GOP in the House for holding up a vote to send relief funding to his and other states hit by Hurricane Sandy. By serving his constituents, has he somehow abandoned Republicanism? If this is the litmus test that the GOP will apply to their members, there party will become an ever-shrinking shell of its former self.

And that threat has become obvious to some of the conservative movement’s most influential voices. Politely, but firmly, friends of CPAC like conservative columnist Jonah Goldberg and the editorial board of The National Review have both admonished the conference for its exclusionary impulses.

“The problem is that CPAC is the first bottleneck in the Republican presidential pipeline, and at precisely the moment the party should be making every effort to be — or at least seem! — as open as possible to differing points of view, it’s chosen to exclude the most popular governor in the country,” Goldberg wrote.

Why? Because, a source familiar with CPAC’s internal deliberations told National Review Online, Christie has a “limited future” in the Republican Party due to his position on gun control.

C’mon, really? The man is going to be re-elected as a Republican. That’s a little future right there. Also, CPAC is chockablock with speakers who have a limited future — or even a limited past — in the Republican Party.

The National Review, taking a softer approach, notes accurately that “a gathering that hopes to speak for the conservative movement will be better equipped to do so if it represents the overlapping gamut of views included in it.” While The National Review has been critical of Christie’s political decision in the past, they are wary of any group that would seek to cast him “out of the conservative movement.”

As with GOProud, merely giving space to Christie’s views would not amount to an endorsement of them. But it could help move the intra-conservative conversation in productive new directions. And that, as we understand it, is what CPAC is supposed to be about.

Conservatives who support CPAC’s decisions could dismiss Cupp outright. Maybe they could brush off Goldberg. The National Review has gone off the reservation before, so their warnings, too, could be ignored. Together, they represent the breadth of conservative public opinion. They cannot be discounted.

Even the conference’s allies are now speaking out and drawing a line in the sand. The message: it’s time to get with the program. Either you’re part of the GOP’s great rebranding effort, or you will be marginalized. Choose wisely, CPAC.