Grover Does The Old Spice Dude On Sesame Street 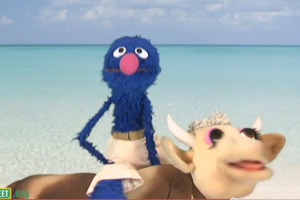 Sesame Street is awesome — not only because they teach, edify and entertain kids but because they savvily make it possible to do so with parental engagement, because the show is loaded with references for Mom and Dad. Exhibit would-you-like-to-buy-an-A: Grover does the Old Spice Dude, towel, beach and all in the new “Smell Like A Monster.” Look at yourself. Now back to Grover. Now back at yourself. Now back to Grover. Priceless. Though I think my favorite part is the “moo.” Watch and kvell below:

If you didn’t catch the reference above, what kind of childhood did you have? But also, it’s “Lefty the Letter Salesman,” offering Ernie alphabetical contraband for thirty years and counting (that is, counting back to my own childhood). Here he is below, offering up an “O.” It’s actually a pretty good deal:

In addition to controversial boob-cameos from Katy Perry, Sesame Street reliably has non-controversial but always-enjoyable material featuring celebs and now, celebrity memes. Back when I was a kid, the celebrities were the characters on Sesame Street, which is why I am beyond excited to be the first Google result for “Family dinners are really great, we eat the food and then the plate” — the quote is from the Sesame Street Monster Album, which I used to looooove. It’s from “Five Monsters In My Family” which was the Monster version of “Five People In My Family,” which you can enjoy nostalgically below. One, two, three, four, five!

“Five People In My Family”