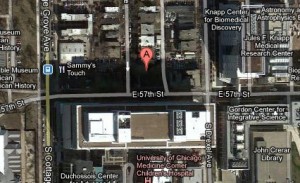 Conservatives were faced with a nightmare scenario this week when it was revealed that a childhood home of former President Ronald Reagan is to be bulldozed, maybe possibly to build a parking lot that people might one day park at if they couldn’t find a space in the nonexistent Barack Obama Presidential Library Parking Lot. Mediaite’s Noah Rothman wisely festooned our headline with more qualifiers than the NHL playoffs, but apparently, other conservative news outlets ran with the story in much more definite terms. Predictably, along came Media Matters to ruin the fun, and relieve gullible conservative of their Obama-cootie night terrors. In all fairness, it’s unclear where the angst really comes from, the “Barack Obama” part, or the “Library” part. Kidding! It’s the “Presidential” part.

To those chasing the @mailonline “scoop” about alleged Obama library parking lot – stand down. The report is false. Shocking, I know.

To be clear, we accurately reported that “President Ronald Reagan’s childhood home in Chicago is scheduled to be demolished. The University of Chicago recently purchased the property and announced that it intends to turn the property into a parking lot,” and also that “The school has been lobbying the White House to become the site of Obama’s presidential library after he leaves office in 2017.”

As it turns out, though, the space is already earmarked for use as a parking lot for the University of Chicago Medical Center. Well, not exactly even a parking lot:

the scheduled demolition will reportedly make way for a grassy strip bordering a new parking lot that will be part of the university’s expanded Medical Center.

Still, if, some day, a Barack Obama Presidential Library is built somewhere near this site, and the Obamabot library-goers park far enough away from it, they might have to walk on the grass that stands where President Reagan’s onetime apartment building, that he lived in for less than a year when he was four, once stood. Or Kevin Bacon will walk on it for all of us.

In all of the reporting on this, though, no  one has pointed out that Grover Norquist founded an organization dedicated to naming things after Ronald Reagan (there’s a Ronald Reagan Street in Prague), so why didn’t they step up and buy the vacant building? Would President Reagan really have wanted taxpayers to foot the bill for preserving every place he ever hung his hat?

But the larger question, for Media Matters, is why? What possible good does it do to debunk this story? In what way is it a bad thing that gullible conservatives are freaking out over something they saw on Fox News, rather than a source of joy?

That’s why I urge them to look into another breaking story. According to news reports, on the site of one of former President Ronald Reagan’s adulthood homes now stands the Barack Obama Presidential President.