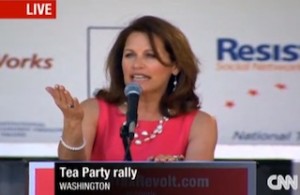 In the aftermath of the Jimmy Hoffa Voter Encouragement Crisis/Incendiary Rhetorapocalypse, conservative media figures have been selectively freaking out, and the White House response to ABC’s Jake Tapper has led to a newly-coined “Hoffa standard” by which campaign surrogates are to be judged. As Alan Colmes points out, though, perhaps James Hoffa‘s remarks ought to be judged by the “Bachmann Standard,” since current GOP hopeful Rep. Michele Bachmann used nearly identical rhetoric to encourage voters in 2010.

That’s right, at the Tax Day Tea Party in 2010, Bachmann told supporters ““I am the No. 1 target for one more extremist group to defeat this November,” and added, “We need to have your help for candidates like me. We need you to take out some of these bad guys.”

Here’s the clip from Bachmann’s speech: (via CNN)

Granted, “extremist group” and “bad guys” aren’t quite as PG-13 as Hoffa’s “sonofabitches” description, but the sentiments are at least equal, and the fulcrum of right-wing outrage has been the “taking out” part. However, in both cases, and in the case of Hoffa’s remarks on Morning Joe two weeks ago, these remarks were all made within the clear context of electoral action.

This effort to set up a “Hoffa standard” ignores the fact that not all crazytalk is created equal. Phrases like “take them out,” or metaphors like a “war on workers,” have clear meanings in the context of electoral politics. On the other hand, phrases like “Second Amendment remedies, or suggestions that a non-elected official is “treasonous” and would be “treated pretty ugly,” don’t have such obvious metaphorical connections. Judging them all by some “Hoffa Standard” apple-orange marmalade is foolish.

Be that as it may, if people want to take this “Hoffa Standard” as a license to initiate explosive crazytalk diarrhea, so much the better. The less inhibited our political dialog is, the truer the picture we get is. Voters can decide for themselves if Jimmy Hoffa is correct when he says there’s a “war on workers,” or if taxes are really as bad as slavery.