Hannity and Greta React to Big Primetime Shakeup at Fox… 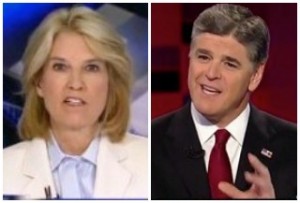 Today Fox News finally confirmed its new primetime lineup, with Greta Van Susteren starting at 7, Megyn Kelly getting the 9 P.M. slot, and Sean Hannity moving to 10. Both Van Susteren and Hannity reacted to the news today, thanking their audiences for sticking with them over the years and staying on as they make the shift.

Van Susteren wrote about the move on her blog Gretawire, talking about all the new and exciting opportunities she now has to expand and retool On the Record for a new audience.

I am extremely grateful to Roger Ailes for letting me and letting us have this new challenge. I don’t intend to let him down and neither does our very smart and hardworking staff of ON THE RECORD…

Ok, I confess, there is a part of me that does think it will be fun to get home early by 9pm each night! I won’t have to dodge the late night drunks on DC streets…or eat all my meals at the vending machine in the break room (but I may miss those Cheetos and DOTS! but perhaps that can be lunch?)

Meanwhile, Hannity reacted to the news on his radio show, telling listeners that his move was in the works for a while. He dismissed all the media coverage saying he was unhappy about any potential move, explaining that his new schedule allows him to spend more time with his family.

Hannity talked about doing a lot more pre-tapes for the 10 P.M. slot, saying that he is “extraordinarily happy and blessed and appreciative that Fox has been so supportive, so accommodating, so helpful in helping me to adjust my schedule so I can be home at night more often.” He added, “Anybody that tells you anything different here or writes anything different in the days to come is either speculating or just lying.”