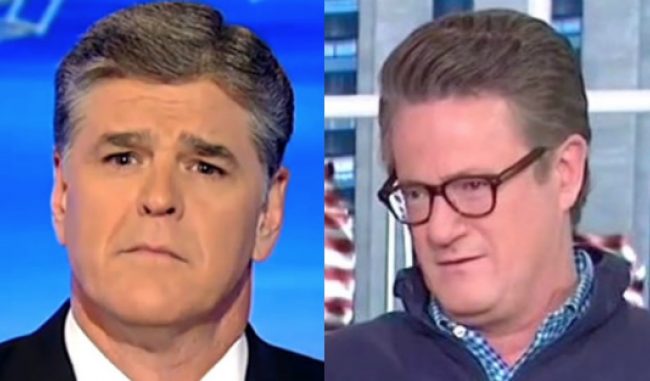 It looks like Fox’s Sean Hannity intends to keep the fight going today between himself and MSNBC’s Joe Scarborough.

The host of Morning Joe recently critiqued White House aide Stephen Miller last night over the latter’s performance on this Sunday’s news shows. Hannity took notice of this late last night, and the pro-Trump pundit took the opportunity to rip Scarborough and his “horrific ratings” on Twitter.

Scarborough never directly fired back at Hannity’s jabs, but he did have this to say when Washington Examiner’s Gabby Morrongiello brought them up:

Sorry to disappoint you. A “war between” suggests that I have found it worth my time to respond. I haven’t. https://t.co/0uVwWduEFN

Hannity took notice of this, and it prompted him to go on the offensive again:

We know y you really won’t respond Joe. Don’t we? So you viscously and arrogantly attack a person you know Cannot Fight back. https://t.co/yv0mtEDSbD

Let’s make a deal. You leave Steven Miller alone (as you know he cannot respond) and I’ll ignore you like most of America does. https://t.co/yv0mtEDSbD

Or Joe, instead of being a bully, invite Steven on your show for a one on one debate. Not 10 on 1. My $ is on Miller. https://t.co/yv0mtEDSbD

In the last several weeks, Hannity has blasted the MSNBC host and fellow conservative on multiple occasions.