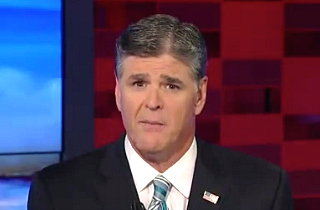 Sean Hannity has only ever had positive experiences with law enforcement officials, so perhaps, despite outrage over the Michael Brown shooting, it’s unfair to paint the police in a negative light overall.

On his Wednesday afternoon radio show, Hannity discussed New York Police Department commissioner Bill Bratton‘s Tuesday remarks that “you must submit to an arrest, that you cannot resist it” and that “the place to argue your case is in court, not in the middle of the street.”

Agreeing with that point, the conservative commentator added his own personal experiences in light of the ongoing protests in Ferguson, Mo.:

By the way, I don’t know how you are when you get pulled over by a cop. I know how I am all the times I did. […] When a cop pulls me over, I put my hands outside of the car. If I’m carrying a weapon, which I’m licensed to carry in New York, the first thing I tell the police officer is, ‘Officer, I want you to know I have a legal firearm in the car.’ First thing I say to the officer. He’ll ask, ‘Where is it?’ I’ll say, ‘It’s in my holster.’ And he says, ‘Alright, just keep your hands outside.’ That’s usually the protocol. And then ‘Can I have your license and registration, please? Move slowly.’ And I often would even step out of the car, lift my shirt up so he can see where the gun is. ‘Yes, sir,’ ‘No, sir,’ writes me a ticket.’ Thank you, sir,’ and that’s it. You battle the issue in court.

Hannity is a millionaire white broadcasting star, so it’s unsurprising he doesn’t understand that despite his wonderful experiences with the police, there are plenty of others — mostly minorities — who feel harassed and/or mistreated by law enforcement even when on best behavior. Useful resources like this “10 Rules for Dealing with Police” DVD wouldn’t exist without some systemic issues in American law enforcement.

Nevertheless, Hannity did concede that there may be some “bad cops” out there, “but I don’t think that’s the majority of cops going to work everyday thinking that they want to kill somebody.” He added that most police officers he knows went into the profession because of a genuine “calling” to protect and serve their community.

“But there are some bad apples,” he conceded once more. “But you can’t taint the whole profession because of the actions of a few.”

The radio host explained that he has so much confidence in law enforcement officials and the justice system, that if there was wrongdoing on the Ferguson Police Department’s part, he is certain it will come out during investigations.

Of course, that’s not always the case. Cover-ups happen. As with any government organization, the propensity to lie, cheat, and steal is built into the incentive structure. Strange how someone like Hannity — rightfully so skeptical of agencies like the IRS, EPA, VA, etc. — can’t imagine that justice might not be served sometimes.

UPDATE — 7:55 p.m. ET: One Mediaite commenter makes an interesting point (What?!?! I know, right?!?!?). Hannity is a licensed gun owner advising his listeners to inform officers that you have a firearm on your person, and then he described how he even lifts up his shirt, upon exiting the vehicle, to show officers his holster. Reaching for your waist when officers know you are armed: Sounds like the opposite of a good idea.