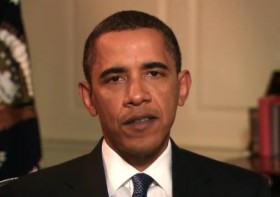 “L’shana tova, tikatevu!” That’s not your bubbe talking, that’s your President, wishing you a very happy Jew year. Today Barack Obama released a YouTube greeting for Rosh Hashanah, wishing his Jewish pals a Happy New Year and calling us “a light unto the nations.” Aw.

But what’s this, Bubbeleh? You’re looking so tired! Are you getting enough sleep? Are you eating enough? Here, put on a sweater. No disrespect to Michelle, but this Rosh Hashanah, it looks like Obama could use the ministrations of a Jewish mother – according to Twitteleh, that is.

Yes, I did just make that segue. Seamless, wasnt’ it? Twitteleh is the new hot viral video that ten zillion of my Jewish friends sent me yesterday, about the latest social networking craze: Twitteleh, Twitter for Jewish Mothers. It is “social” in that your Jewish mother will read it, and think what you write is brilliant, oy such a doctor you could have been and made your mother so proud. Blogger? What kind of job is that for someone who went to law school? 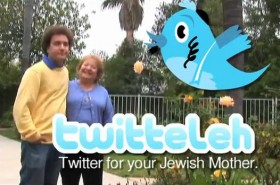 Er, never mind. The point is, Twitteleh breaks 140 characters down to even simpler component parts: Where are you?, What have you eaten? and Are you wearing a sweater? Also, it’s a joke. But a damn good one (“Actually calling your Jewish mother takes hours, and drains you of energy. With Twitteleh, you can update your Jewish mother in an instant. Use all of your extra time for kvetching, kibbutzing, and schtupping.” A sweet New Year, indeed!)

So: Whose Rosh Hashanah message has been better received? One video is currently at 21,460 views, the other 14,546 views. Which is which? Well, one of them features a boychik who went to law school (so much nachas!) and the other features a delicious bagel. It’s a little meshuggeneh, but yes — Twitteleh is in the lead. Take from that what you will.

Here are the two videos for you to enjoy. Shanah Tovah!