Here Are the Most Bizarre Tweets From Gen. Flynn, Trump’s National Security Advisor
Opinion
GENERAL-LY OFF

Here Are the Most Bizarre Tweets From Gen. Flynn, Trump’s National Security Advisor 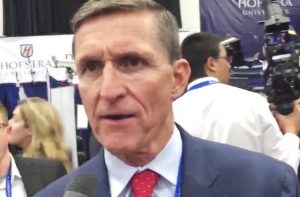 Retired lieutenant general Michael Flynn — who just got tapped to served as President-elect Donald Trump‘s new National Security Advisor — has been a supporter of the candidate’s for quite some time. In fact, General Flynn was a constant campaign presence, offering his support for Trump’s candidacy at every turn.

But the former director of the Defense Intelligence Agency’s appointment to serve as National Security Advisor is raising quite a few eyebrows, notably for his controversial and combative past as a high-ranking intelligence official. General Flynn publicly distanced himself with the foreign policy agendas of both Presidents Bush and Obama, describing himself as the intelligence community’s ultimate “maverick,” for his display of bravado. But his support for Trump’s unlikely candidacy last year should not come as too much of a surprise considering some of the issues General Flynn has endorsed; he has been ambiguous on both waterboarding and the targeting of suspected terrorist’s family members — both things Trump has vocally supported — and has been extremely critical of the U.S.’s anti-terrorism efforts abroad.

But it’s his Twitter feed that is really worth a closer examination, covering, at best, aggressive military posturing and at worst dabbling in the realm of the conspiratorial and downright strange. Here are a few examples of the wonders contained in General Flynn’s Twitter feed:

Like this Tweet from the day before the election, where the General demonstrated that he’s got this Twitter lingo thing DOWN with the sentence, “If 10 min, u will no Y we will win.”

If 10 min, u will no Y we will win – Gen. Flynn: The people of this country have an easy choice via the @FoxNews App https://t.co/qDb2qTtMyY

…or this Tweet, where he apparently smashed a bunch of buttons on his keyboard so as to indicate a SCREAMING NECESSITY:

But those are just the warmup acts to this performance. Let’s dive in to the weird.

It took 1 year to review 60K and 8 days to review 650K? Smart machines or not, something does not jive. Thoughts?

How about this little ditty all about “Money Laundering [and] Sex Crimes w Children”?

Or here, where he invokes “The African American.”

And this! Looks totally legit!

Then there’s this Tweet from the Pulitzer Prize winning site www.yesimright.com with the headline “CIA Director SHOCKS Obama And CONFIRMS That trump Was RIGHT About Muslim Refugees”:

This next one — the third ever Tweet from the General — admittedly isn’t strange or conspiratorial, it’s just kind of funny as he addresses his “gang”:

Yo, how is the gang doing…I’m ready to talk…r u?

And in this countdown, I now present the number one most outlandish Tweet from General Michael Flynn who is set to serve in the White House in 62 days…

Fear of Muslims is RATIONAL: please forward this to others: the truth fears no questions… https://t.co/NLIfKFD9lU

“Fear of Muslims is RATIONAL,” he Tweeted in February. Remarkably, this — and so many others — have never been deleted.

Note to the team of Trump staffers (attn: Kellyanne Conway) who made the decision to reportedly take Donald Trump’s phone away from him in the final weeks before the election… may we consider extending that privilege to other members of the Trump orbit, too?
—
J.D. Durkin (@jiveDurkey) is an editorial producer and columnist at Mediaite.