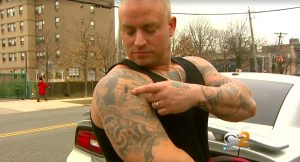 On Christmas Day, the New York Post reported, without a hint of skepticism, or even an “allegedly” disclaimer, that a New York City firefighter was attacked by four “thugs” early Christmas morning and robbed of almost $3,000 in gifts. Making the story even more remarkable (though it was oddly downplayed at the time) is that it was all an apparent “hate crime” as the attacks began by the assailants calling the firefighter “cracker,” and two of them were beaten up badly by the victim, then left behind by their fellow assailants who carried the gifts away into the dark of night.

The literally incredible story was followed up (with the reporter at least citing “he says”) the next day by the CBS affiliate in New York, which did an interview with the man at the center of the wild tale, Steven Sampson. If you watch the interview, you will notice his complete lack of anger at his attackers and a sense of almost amusement of over what had happened. It is almost as if it didn’t really happen and he made it all up.

That’s because police say he did. The story was a complete fraud, according to the authorities.

What is particularly amazing about this latest example of the mainstream news media being duped by an apparent “fake” story, is that this one was so obvious and yet the reporter who broke the story could not have handled in a less professional fashion. The episode clearly exposes how and why this type of thing is happening so often and probably even more than we know.

I was first alerted to this story on December 26th by an old high school friend of mine named Dave Petrucco. He is a long-time New Yorker and smelled bullcrap all over this story. Since I have become somewhat known for debunking media narratives (including recently with the highly suspect “Viral Santa and the Dying Boy” story falling apart), he wanted to know if I agreed with his assessment and whether I thought it was something I should investigate.

For many reasons it appeared to me that the story was clearly made up. The first was the use of the term “cracker.” No one uses that word and Sampson was clearly implying that this was a race/hate crime and yet there was no apparent description of the suspects as Black or Hispanic, and no outrage (either by Sampson or in the original news story) consistent with such an inflammatory charge. Also, if this really was an anti-white hate crime in New York City on Christmas, Fox News Channel would have been all over it.

There were also plenty of other obvious questions about the story:

– Who goes to a gift party after midnight on Christmas Eve?

– Who decides to open up their car truck to rummage through expensive Christmas gifts, for no apparent reason, after midnight in the south Bronx? What firefighter has $2,600 in Christmas gifts in his car late on Christmas Eve?

– Why would “thugs” decide, late on Christmas Eve, to randomly go after a guy built like an NFL fullback with no knowledge that he had anything of value to steal?

– Why did he not call the police to apprehend the two “thugs” that he beat up? How did only two guys get quickly away with so many items without leaving anything behind?

– Why did he not immediately tell his wife about what happened, even though he had a cut which required nine stitches, was apparently a hero, and presumably needed to explain what happened to all those Christmas gifts?

Since he is an EMT, who presumably has extensive experience in dealing with cuts, was he not highly capable of creating a “safe” wound to cover for whatever was really happening very early on Christmas morning?

I immediately forwarded the New York Post story to my Mediaite editor and expressed extreme skepticism about its truthfulness and the way that it was being reported. He called the primary writer, Tina Moore, a long-time crime reporter and she told him that there was a police report of the incident and that she stood by the story. At that point, it was decided that there wasn’t a whole lot we could do with it.

Still convinced that this whole thing made absolutely no sense, I decided to see if I could at least get Tina Moore on the record in case my instincts were correct, as well as give her a chance to tell me if there was something I was unaware of which might convince me that I was wrong. The results, especially in retrospect, were both hilarious as well as a perfect illustration of how a deadly combination of ignorance and arrogance are making the news media highly susceptible to being constantly duped by stories which are not true.

Here is the entire, very telling, Twitter exchange between me and Moore:

@TinaMoorereport @nypost Tina I’m sure U checked this out, but doesn’t it seem awfully fishy/racist 2 be hanging it all on word of 1 person?

@Zigmanfreud @nypost He filed a police report. I would never hand it on a story from him without that. thanks, though.

@TinaMoorereport @NYPost So anyone who files police report & has a cut must be telling truth?Seriously? Now I REALLY don’t believe the story

@Zigmanfreud @nypost Are you serious? We write about police investigating things all the time that aren’t proven to be true yet. You’re an a

@TinaMoorereport @nypost Did U ask him why he let guys he beat up get away? Did U ask if he’s claiming this is a “hate” crime? Cracker? #LOL

@TinaMoorereport @nypost You wrote the story as if it was true without a hint of skepticism. It may be true, but there are ton of red flags.

This EMT made a full report to cops, who are investigating. We will follow if it’s proven false. Enough said. pic.twitter.com/1uY32ANbUJ

As you can see, I honestly wanted to make sure I wasn’t missing something. As I stated to her, the incredibly weak, insecure, arrogant, unprofessional, and defensive retorts I got actually helped convince me that the story had to be suspect (I find that the nature of a reporter’s response is usually the best indicator of whether a story is legitimate or not). She was now relying completely on the filing of a police report alone as being inherently newsworthy/reportable, when the article was written as if it were completely true and verified. Then she attacked/mocked me (she even appears to calls me an “a,” which I assumed was “ass”) instead of addressing the substantive problems with the story, before literally telling me to “shut up” in the most haughty/ironic manner possible.

The most shocking part of all of this is that, based on my extensive experience in dealing with reporters, none of this was stunning at all. Including the fact that, despite her promise of a correction if the story was proven false, as of this writing, the original post has not even been updated and she has not responded to any of my tweets seeking a simple acknowledgment that she blew it and that I perhaps deserve an apology (As linked above, The Post did report on Sampson being charged for making up the story but did not change its original story).

I doubt I will ever get my apology. I would much prefer that the news media do a better job of vetting stories which don’t make any damn sense BEFORE they report them as news.