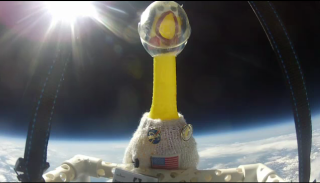 Recently, a group of high school students worked with a team at NASA to launch a rubber chicken directly into a solar storm. The launch was to prepare for a later experiment testing how species of microbes survive at the furthest point of the earth’s atmosphere. To make things even better, the chicken, Camilla, was mounted with four cameras and the resulting footage makes for today’s most perfect videos. They prove that, despite the loss of the shuttle program, NASA is still engaging in fascinating experiments. They show that today’s youth is interested in science. And, most importantly, they’re a great watch on April 20th.

Seriously. A rubber chicken floating in space? That’s like 2001 meets The Muppets! 4/20 gold!

“During the two and a half hour flight, Camilla spent approximately 90 minutes in the stratosphere where temperatures (-40 to -60 C) and air pressures (1% sea level) are akin to those on the planet Mars. The balloon popped, as planned, at an altitude of about 40 km and Camilla parachuted safely back to Earth. The entire payload was recovered intact from a landing site in the Inyo Mountains.

The payload, a modified department store lunchbox, carried four cameras, a cryogenic thermometer, and two GPS trackers. Seven insects and two dozen sunflower seeds also rode along to test their response to near-space travel. The seeds were a variety known to gardeners as ‘Sunspot’ (Helianthus annuus).

One week later, on March 10th, the storm was underway, and the students repeated the experiment.”

Yeah, I still don’t get the point either. Lets just watch the pretty videos!