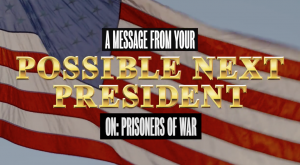 Donald Trump might have spelled out his donations to veterans groups today, but Hillary Clinton‘s been busy using the opportunity to remind people that Trump’s relationship with America’s Bravest is far from perfect.

The mogul held a press event at Trump Tower Tuesday, where he went back and forth between attacking “sleaze[s]” in the media and congratulating himself on how successful his January fundraiser was. Clinton’s been working to reinforce her base ahead of the California primary, but her team revived her “Potential Next President” series on Twitter to point out one of Trump’s most controversial moments of the campaign:

Trump has something to say about prisoners of war.https://t.co/sbMCyxVfRo

Yes, that was a throwback to when Trump said that John McCain was only a war hero because he got captured in Vietnam, a comment Trump has yet to apologize for. Some veterans have excused Trump’s comments and said his fundraiser is proof he cares about vets, but others have refused Trump’s donations and accused him of using them as pawns.

The Clinton campaign has been hitting Trump on his rally since the day began. The campaign has set up veteran protests against Trump on multiple occasions, and they also put out a statement saying he only released details on the money after caving to pressure on his “disgraceful” record.