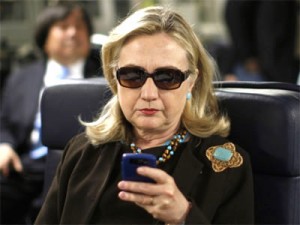 Hillary Clinton should not run for president.

That was the basic premise of Ron Fournier‘s National Journal column earlier this week that caused more then a few ripples in the Potomac. And after observing the former First Lady-Senator-Secretary of State going back to last summer, there appears to be one thing that’s certain:

Before we continue–if this is even possible for some–take whichever side you’re rooting for, whether it’s Team Red or Team Blue, and put it aside. Then look at the past nine months since Mrs. Clinton’s book tour began and ask yourself this:

Now apply those four words to Hillary: Was she crisp on the aforementioned Dead Broke book tour? Do reckless missteps such as conducting all State Department business on a private email account illustrate focus? Can she energize crowds on the stump? And if you’re a progressive or left-of-center independent, does she really inspire you with her ideas, her worldview?

The most important question: Do you believe she wants to be president to make the country a better place? Or does she simply want to finally break that glass ceiling by being America’s first female president?

When talking to those who would never vote Republican, the lyrics slightly change but the song remains the same: “I’m not crazy about Hillary. She’s too hawkish/tied to Wall Street/reminds me of the female Frank Underwood whose only goal is power…but I’d take her over any Republican out there right now and besides, she’s the only Democrat who can win.”

But as Mitt Romney learned, the anti-vote isn’t a path to victory. Or in this case, simply not being a Republican will not suffice in carrying the only four states that really matter in 2016, where the margin for error is impossibly small: Ohio, Virginia, Florida, New Hampshire. Mr. Romney lost those four states by about 330,000 votes. If the number went the other way, the GOP challenger would have still lost the popular vote by more than three million votes but still won the presidency.

So while Hillary holds a two-point lead over her closest GOP challenger right now (Jeb Bush, according to a Quinnapiac Poll taken before the email story exploded), one thing that needs to be kept in mind is that she always polls higher when she’s under the radar and away from a microphone. Unlike her husband, she’s barely an average public speaker. The words feel forced, the delivery neatly packaged but largely tedious.

But policy ultimately matters, right? Not necessarily. As Mark Halperin–hardly a right-wing ideologue of Bloomberg and MSNBC fame– put it during his Bloomberg TV show With All Due Respect:

Part of what the presidential race comes down to is who who do you want in your living room for four years? Who do you like? Who do you want to listen to? She was flat, she was slow. At her best moments, she was not that interesting. I fell asleep twice during this speech. I was tired, but I would not fall asleep during a Bill Clinton or a George Bush speech or a Barack Obama speech. She needs to be better. I don’t know if she was distracted or what, but if that’s the best she’s got, the country’s going to be sick of listening to her after a few months.

And that’s what should be disturbing to top Democratic brass: Guys like Fournier and Halperin (author of the great Game Change) are two of a shrinking bunch of political pundits who still know how to be objective. And when they show serious doubts (Halperin) or outright suggest going into retirement (Fournier), that’s not a good sign. Note: This isn’t a right-wing conspiracy where eeeevil Republicans will overplay their hand and turn this crisis into an opportunity for Hillary. The mainstream media is on this story heavily now. Her chief defenders are David Brock (Media Matters), Paul Begala (who will likely join her campaign), and Lanny Davis (See: Begala, Paul). The Clintons can try to hide and not comment verbally (Twitter doesn’t cut it here), but this isn’t going away.

So will Hillary still run? Probably…but partly due to party pressure. Why? Well…have you seen the Democratic bench lately? It’s like the New York Knicks of political sport: Jim Webb, Elizabeth Warren, Bernie Sanders, Mark Warner, Martin O’Malley, Vice President Joe Biden. If not Hillary, who? But if someone from the Democratic side were to suddenly emerge, know this: The Clintons would be abandoned twice as quickly as they were in 2008 once the first viable alternative came along.

The Wall Street Journal says Hillary Clinton will declare next month that she’s running for president.

But from the book tour… to an ill-advised email strategy… to being largely uninspiring when gender is eliminated from the conversation… to being a clumsy candidate in general… there’s more than just a few reasons to avoid what would be (another) long and losing campaign.