Hillary’s Turnstile Trouble a Non-Story, But Here’s a Lesson in Hypocrisy Courtesy of Bush 41 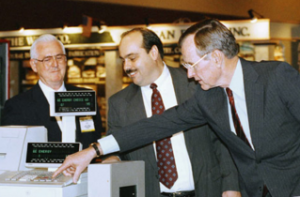 The terms “media bias” and “liberal media” are the kinds of accusations that are as punchless as the term “racist” these days: Overused, lazy, misused and therefore lacking any real bite when applied. As a result, media bias or liberal media are rarely used in this space (if ever).

Does bias exist in media both liberal and conservative? Yes. Is trust in media at an all-time low? Yes. Has trust from consumers (readers, viewers) been broken so many times that bias and/or dishonesty in some form is almost expected? Of course. But sometimes there’s some fun (for lack of a better word) examples of subtle bias and hypocrisy worthy of 800 words and a column choice of the day. Today’s winner is Hillary Clinton’s difficulties swiping a MetroCard (a subway pass here in New York) through a turnstile.

WATCH: In scene many New Yorkers know well, Hillary Clinton runs into trouble getting through the subway turnstile.https://t.co/hcGj0oz4IJ

Hillary Clinton couldn’t get through the subway turnstile, suffered like every New Yorker https://t.co/j2vJI8EklM pic.twitter.com/QFTa9lLgEX

Pretty forgiving statements. Fact is that 80 percent of all MetroCard swipes are successful, according to a 2011 report by the New York Daily News (on a personal note, I’ve unofficially been batting above .900 for years). The primary reason those 20 percent aren’t successful, according to the report, is because of damaged or defected cards… and it’s doubtful Hillary was handed one like that given the 700 cameras around to capture the moment.

Mrs. Clinton — who doesn’t even drive and likely wasn’t your standard straphanger during her eight years in New York as Senator — gets a pass here (pun intended). And given the much, much more important things happening on the campaign trail and in the world in general, I normally wouldn’t take any issue with said pass. We’ve been concentrating on the silly stuff way too much in this tabloid, reality TV election.

Except… there was this time when a sitting president was mocked — very loudly — for not understanding how a supermarket scanner worker. The drumbeat was so loud at the time that it cemented a notion that he was out of touch with the average citizen, a typical Republican elitist. The year was 1992. President George H.W. Bush was fighting to stay in office and had a recession, Bill Clinton and Ross Perot to overcome. So at a campaign stop at the National Grocers Convention in Florida, here’s how the New York Times’ Andrew Rosenthal described one scene during his visit that helped morph Bush 41 from candidate to caricature:
(Commentary mine in italics):

[President George H.W. Bush] emerged from 11 years in Washington’s choicest executive mansions to confront the modern supermarket (Alternate Rosenthal: The completely-disconnected rich guy — in an effort to pander to proletariats — decided to see how the peasants live).

Visiting the exhibition hall of the National Grocers Association convention here, Mr. Bush lingered at the mock-up of a checkout lane. He signed his name on an electronic pad used to detect check forgeries.

“If some guy came in and spelled George Bush differently, could you catch it?” the President asked. “Yes,” he was told, and he shook his head in wonder (Alternate Rosenthal: Boy… this guy doesn’t have a clue, does he?).

Then he grabbed a quart of milk, a light bulb and a bag of candy and ran them over an electronic scanner. The look of wonder (“wonder” stated again for emphasis) flickered (like a light bulb above one’s head when they kinda-sorta understand how something works) across his face again as he saw the item and price registered on the cash register screen.

“This is for checking out?” asked Mr. Bush. “I just took a tour through the exhibits here,” he told the grocers later. “Amazed by some of the technology.”

Marlin Fitzwater, the White House spokesman, assured reporters that he had seen the President in a grocery store. A year or so ago. In Kennebunkport. (Really short sentences are invariably meant to be dismissive and condescending, which Rosenthal succeeds at here)

Some grocery stores began using electronic scanners as early as 1976, and the devices have been in general use in American supermarkets for a decade (Shorter Rosenthal: Bush doesn’t have a clue about technology that’s been around for more than 15 years nor understands those who actually have to shop for themselves).

So as you can see, there are two ways to spin non-stories. Hillary Clinton struggles swiping a MetroCard and looks very awkward, unnatural in the process. No matter… there’s really nothing to see here. But when juxtaposed with the way Bush’s experience with a supermarket scanner and the way it was described in the nation’s top newspaper, it’s worth noting giving the lasting and damaging effect the narrative had on that 1992 race and therefore impossible to ignore when putting the two scenarios side-by-side.

For a more modern parallel, picture Donald Trump or Ted Cruz struggling to swipe successfully at a subway turnstile. Now imagine what the coverage would look like around that. In Trump’s case in particular, the networks would likely cut into regular programming with a special bulletin. Twitter would break.

Liberal bias. The liberal media. The accusations have lost their oomph due to one too many screams about it.

But once in awhile, it’s a hoot to take a swipe at the hypocrisy.