House Authorizes Aid for Rebels in Fight Against ISIS

House Authorizes Aid for Rebels in Fight Against ISIS 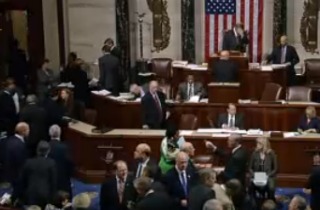 In a 273-156 vote, the House voted to aid rebels fighting against the Islamic State (ISIS), by sending them weapons and assisting in their training.

The amendment, which was attached to a spending bill to continue funding the government, had broad bipartisan support: according to Roll Call, 143 Democrats and 176 Republicans supported the measure, while 55 Democrats and 53 Republicans voted no.

President Barack Obama praised the House’s vote in a statement, calling their action “another step closer to having the authorization to train and equip vetted elements of the moderate Syrian opposition so they can defend themselves against, and ultimately push back on, ISIL forces.”

While this is far from a declaration of war, nor does it actually send American troops to the Middle East to combat ISIS, the vote on this continuing resolution was widely seen as a proxy vote on whether to renew America’s presence in the region, and whether the Free Syrian Army would always remain an ally of the United States:

Rep. Barbara Lee, D-Calif., a staunch opponent of the Iraq and Afghanistan wars, said the six-hour debate on the amendment reminded her of “the failure to have a thorough and robust debate in the wake of 9/11,” which, she said resulted in an overly broad authorization that was a “blank check for perpetual war.”

Other members voted against the amendment because they worried of an opposite effect. Louisiana Republican John Fleming expressed concern that the authorization was “little more than an incremental strategy, not unlike the one used in Vietnam.”

“History warns of the dangers of such approaches,” Fleming said. “By moving hesitantly in piecemeal fashion, the enemy has more time to learn, adapt and get stronger. This is a recipe for a stalemate and failure.”