Smoke filled a D.C. metro tunnel tonight and caused a serious crisis. The L’Enfant Plaza stop was completely evacuated and closed during the crisis earlier today, and passengers were evacuated from a train in the tunnel in question. People struggled to breathe and firefighters arrived with oxygen. Several people were injured, and one person actually died.

All this is pretty horrible, but important for the context in which people took this tweet tonight (which has since been taken down) from the Netflix show House of Cards: 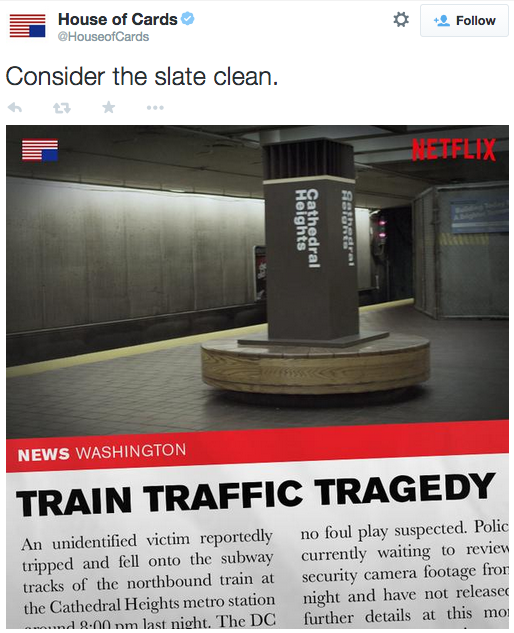 Now, in case you haven’t seen House of Cards and don’t know the context, here’s the vague but also pretty spoiler-ish explanation: the first episode of season two features a major character being pushed in front of an oncoming train in the Metro by another major character.

It’s likely the tweet just a very poorly-timed auto-tweet. Whatever the case, some people really didn’t appreciate it:

. @HouseofCards Probably not the best time for this tweet about a fake Metro death when there was a real one today