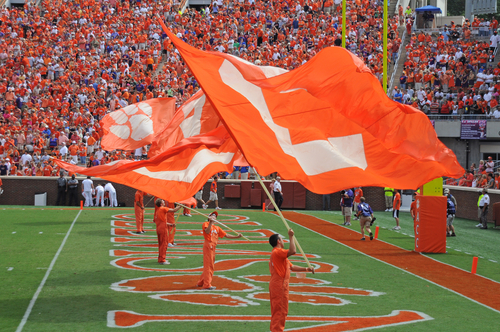 Conference play is kicking into gear after two weeks of fun non-conference match-ups. And at the top of the list on Saturday’s slate is a beauty of an ACC showdown between the defending champion Clemson Tigers and the Louisville Cardinals.

Last year’s meeting between the two was one of the best college games of 2016. Clemson squandered a 28-10 halftime lead, but ultimately withstood a furious comeback attempt by Heisman winner Lamar Jackson and the Cardinals and held on to win 42-36 in Death Valley.

The defending champs had a big change at quarterback in the offseason, with Deshaun Watson off to the NFL. But new signal caller Kelly Bryant has done the job so far, leading the Tigers to home wins over Kent State and, more impressively, Auburn. Now, the task gets tougher as they head on the road to take on a talented conference rival.

Louisville did not have to worry about replacing their star quarterback this offseason. Lamar Jackson is back under center for the Cardinals this season, and they’re off to a solid start as a result. The Cardinals dispatched Purdue in a neutral-site affair against Purdue, then followed up with a road win against North Carolina. The crowd in Louisville should be fired up for the home opener in prime time, with College Gameday on site as a bonus.