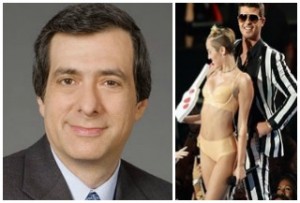 Howard Kurtz does not consider it appropriate for the media to be talking at such great lengths about salacious, risqué news stories. He thinks the media is all too eager to jump on a controversy “that’s naughty, sexually charged,” and, most important of all, “not requiring a command of complicated facts.” Of course, Kurtz is referring to the media’s obsession with former child star and current twerking bear-humper Miley Cyrus. In a post published today on FoxNews.com, Kurtz rightly takes the media to task for “gorging” on Miley Cyrus, slamming the media’s cynical disgust combined with continued fervor to keep talking about it.

So why on God’s green earth was his next piece published all about the risqué Facebook photos of Pari Bradlee?

Let’s get the absolute worst thing about this post out of the way: he somehow got the idea for it because Monday was Ben Bradlee‘s birthday. (In case you need the reminder, Bradlee is a journalistic icon with a long history at the Washington Post, including during the Watergate era.) So Kurtz decided to commemorate that by… writing about what his daughter-in-law posts on Facebook? Is it seriously fair game for reporters to write what amounts to a hit piece on someone’s family member because it’s their birthday? Certainly Bradlee’s wife Sally Quinn doesn’t think so.

There are parts of Kurtz’s column that I don’t feel comfortable quoting here, but here’s just a brief selection to give you an idea of how much detail Kurtz put into this.

She says the bra, which looks like someone took a scissors to it, was suggested by “my beautiful Persian QUEEN Maryam Amirimaidi” and that her mother-in-law, Sally Quinn, “bought me those Louboutins” — the only other thing she is wearing.

Bradlee did not respond to a request for comment.

Okay, first off, it’s a little funny that he actually requested a comment. “Excuse me, madam, I was looking at your Facebook page, and the revealing photos of you inspired me to write a whole column publicly shaming you. Would you care to throw in your two cents?”

Secondly, how can he justify writing this after going on at great length about pundits taking umbrage at provocative public displays?

It could be that he’s just disturbed at how a member of such a well-known family could be posting this kind of material, and just wanted to voice his concerns. There is a much simpler way to do that: in a private conversation with the family. Sally Quinn called Kurtz a friend, surely he could have called her up and said, “Hey, have you seen what your daughter-in-law is posting on Facebook?”

Someone, anyone please explain to me why this is newsworthy.

Kurtz doesn’t even bother trying to mask this as part of an old man screed against the young people of today being too revealing online, because to do so would lump him in with the same class of people he takes to task in his piece on Miley Cyrus. So instead, he takes the safer route and devotes the whole thing to one person. But he is literally doing the very thing he accused the media of doing with Miley Cyrus. He links to her Facebook profile at the top, and asks later on, “Do the pictures go too far?” This is the print version of TV pundits decrying Miley Cyrus while showing the footage of her over and over and over again.

Kurtz comes very, VERY close to touching on the point of his Miley post, when he says, “From one perspective, Pari Bradlee’s provocative poses might be viewed as a quick way to grab attention, especially in contrast to Washington’s buttoned-down culture.”

We’ve come to expect celebrity train wrecks as our due. Singing and dancing is no longer enough. Stars have to do something offensive to grab our collective attention in a fractured media world.

And then there’s this throwaway at the end.

“It’s a safe bet that she is about to attract a lot more friends.”

Yes, because you included a link to her Facebook profile! And thanks to your piece, a lot more people are cognizant of this!

Maybe Kurtz had some innocent, journalistic reason for writing the piece, but whatever his motivations, the whole thing comes off as just a little pervy.