Huckabee: If I Don’t Place in Top Three in Iowa, I’ll End My Campaign
audio

Huckabee: If I Don’t Place in Top Three in Iowa, I’ll End My Campaign 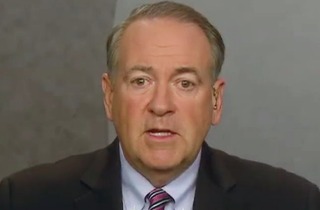 During a radio interview last night, former governor Mike Huckabee said that his campaign will likely come to an end if he doesn’t place in the top three during the GOP Iowa caucus in February.

“If we can’t come within striking distance of the victory or win it, then I think we recognize that it’s going to be hard to take that onto the other states,” Huckabee said told WHO host Simon Conway.

While Huckabee won Iowa when he sought the presidency in 2008, he is currently polling at around 2% right now, according to RealClearPolitics, and he appeared only in the undercard segment of last week’s debate. Conway asked Huckabee to elaborate with questions about his expectations for the state, as well as what sort of voter margin he would accept if he fails to take third place.

“Historically, we’ve always said there are three tickets out of Iowa: You have to come in No. 1, 2 or 3. I think in many ways that’s probably still the case,” Huckabee said. “It may be that if you’re a close second or a close third, that’s very good. If you’re a distant third, then maybe there’s not a way to go on.”

Huckabee said that his plan going forward would be to re-double his campaigning in Iowa, and that “people are going to see it was nothing short of a miracle” if the surge is pulled off.

You can listen to the interview with the audio above (start at 14:30), via WHO.