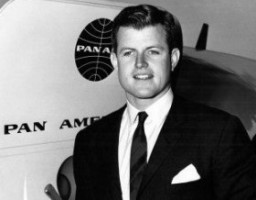 The treatment of Senator Ted Kennedy’s death has received almost as much coverage as the death itself. Immediately, there were accusations of politicization from the right. Around the web, there has been the requisite cataloging of trollish actions and reactions, and the attendant pushback.

We’ve certainly done our part, watchdogging the coverage and the reactions, and measuring the breadth and depth of the coverage.
Mediaite has also worked hard to set the world’s record for voluntary pimping of AMC’s “Mad Men,” shoehorning the red-hot cable drama into every story we can. The Huffington Post, however, has managed to outdo us on both fronts with one fell swoop.

I’m referring, of course, to HuffPo’s recent pictorial,“Ted Kennedy’s ‘Mad Men’-Style Suits.” Can’t you just hear the wheels turning in the guy who thought that up? “Oh, man, we are gonna OWN search engines with this.”

Is it uncharitable to view this as crass? Perhaps, but had Kennedy have died closer to the premier of “Transformers 2,” would we have been treated to renderings of “Kennedy-style Robots and the Things They Transform Into?” Maybe McDonald’s ought to do some kind of “Un-Happy Meal” to mark the occasion.

Plus, isn’t referring to Teddy’s early-60’s wardrobe as “Mad Men-style” a bit like calling the Beatles “Monkee-esque?”

(Photo also via HuffPo – and is that a London Fog jacket we see slung over his arm?)

Tommy Christopher is a Mediaite columnist on politics and media and also reports frequently from the White House. Tommy can also be found at his own blog: DailyDose.us. Follow him on Twitter here.