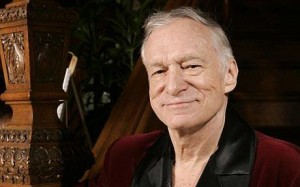 Hugh Hefner, the founder of Playboy, uncharacteristically took to the pages of his magazine in the May issue to express his frustration with the GOP. The topic at hand: sex, of course. More specifically, Hefner decried the Republicans’ “War Against Sex,” declaring, “welcome to the new sexual revolution.”

Patrick Gavin at POLITICO points out that Hefner “doesn’t frequently take to its pages to wax poetic about one thing or another.” In his editorial, “The War Against Sex,” Hefner writes “repressed conservatives” are “pounding on America’s bedroom door.”

Referencing candidates in the GOP primary, Hefner went on (via POLITICO):

“For months I have watched the rhetoric building. Last October, in an interview with an evangelical blogger, Rick Santorum promised to defund birth control on the grounds that contraception is ‘a license to do things in a sexual realm that is counter to how things are supposed to be.’ … Ron Paul was no better, believing that the birth control pill did not cause immorality but that immorality creates the problem of wanting to use the pill. Mitt Romney vowed to see a constitutional amendment banning same-sex marriage and to overturn Roe v. Wade.”

He concluded: “If these zealots have their way, our hard-won sexual liberation — women’s rights, reproductive rights and rights to privacy — lie in peril. We won’t let that happen. … Welcome to the new sexual revolution.”