In Spite Of Press ‘Embargo,’ Avatar Reviews Start Rolling In

In Spite Of Press ‘Embargo,’ Avatar Reviews Start Rolling In 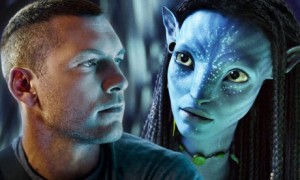 If you’ve followed any entertainment press in the past few weeks, you’ve been hit by the bright blue alien splatter that is Avatar‘s promotional campaign. Director James Cameron scored profiles in magazines like The New Yorker and Wired, while every nerdy and/or cynical blog either mocked the Jar Jar Binks-ness of it all or peed themselves in anticipation. Now, reviews of the film, which were supposed to be embargoed until December 18th in the U.S., are everywhere. Welcome to the internet!

The futuristic space story expected to reinvent special effects screened Thursday night in London and New York, perhaps signaling a premature end to the kibosh on critical reactions. And never eager to be left behind, many press outlets are rolling out their reactions this weekend, hoping to capitalize on a doubtless Google trend, as well as trying — some way, any way — to stand out, either with stabs at experimental humor or enough breathless panting about the game changer the film will be. Here’s a rundown of the big press so far:

GQ‘s “first” Avatar review goes for the wild and crazy contingent, turning the entire film and press rules into an article-long joke. And it’s hilarious:

The first thing I want to reveal about Avatar is that it’s a musical. That was a complete surprise. I knew it was in 3-D and groundbreaking CGI but I didn’t know that director James Cameron was a songwriter in the tradition of Cole Porter and Alan Jay Lerner. All I can say is, get ready. If you loved My Fair Lady, think My Fair Lady in 3-D. Imagine Audrey Hepburn and Rex Harrison plunging into your popcorn. That’s what it’s like.

It gets better from there.

The Sun, meanwhile, gets right to slobbering, calling the production “truly an event movie” and dubbing the final battle “absolutely mind-blowing.” Plus, the reviewer responds directly to early negative feedback about the cartoonish characters: “Everything feels real. It’s as if Cameron has happened upon this alien world and got his camera out.” Score one for Cameron and co.

The Guardian is similarly favorable, calling the film “much, much better than expected,” but admits the plot is a bit “cheesy.”

Variety comes in with what is probably the most in-depth review thus far, calling the picture “a triump,” but broadcasting minor quibbles about the plot. Still, the experience is “all-enveloping and transporting,” according to reviewer Todd McCarthy.

Lastly, Roger Ebert comes out of the gate with a four star review on his website, opening with what is sure to be an highly quotable proclamation: “Watching Avatar, I felt sort of the same as when I saw Star Wars in 1977.” A long time ago, in a galaxy far far away, indeed.

And this is only the beginning. It’s going to be a cold Cameron winter, so put on those 3-D glasses.