In The Wake Of Horrible Layoffs, Condé Nast Rediscovers Digital

In The Wake Of Horrible Layoffs, Condé Nast Rediscovers Digital 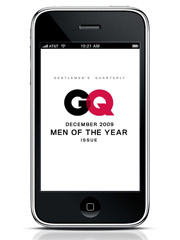 The business woes at Condé Nast have been well-documented and it’s not a pretty sight. With layoffs coming across the board, only the top brass and The New Yorker seem safe after decades of unmitigated reign in yesterday’s publishing model. Now, the reality has hit hard and it’s clear — Condé failed to foresee the innovations and frugal maneuvering that would become necessity amid an economic downturn and a publishing shift toward the cheaper, faster web. Well, now they’ve woken up, but digital media has proved to be a shrill alarm.

Downloadable issues of GQ will be available, beginning with the December issue, on the iPhone and iPod touch, in an effort to shore up a digital fan base before e-reader ubiquity, according to Ad Age. The $2.99 digital version of the print magazine will be available in the app store. Ad Age reports:

Users will be able to see every page as it appears in print as well as renderings of all the content tailored for display on the small screen. They will also be able to watch related videos, hear audio and visit advertisers’ sites without leaving the app.

But more importantly than the technological side is the advertising angle “because Conde wants the digitized versions of its magazines to command print ad rates, not the far lower rates seen online.” Ambitious, to be sure, but it shows Condé on the offensive — delivering a product and welcoming advertisers with open arms to an innovative service, so long as they’re prepared to pay.

But that’s not the only tech-savvy move the company is making post-McKinsey: both GQ and Details have new websites after years of sharing men.style.com — a crowded, unappealing site with minimum branding, poor readability and little room for reader interaction.

Will glossing up and plugging in be enough to save the magazine giant from becoming fully fossilized? It’s hard to say now, but at least they’re working out their creaky joints.