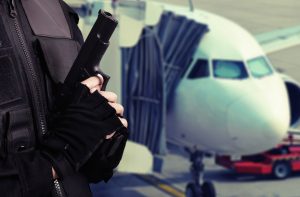 In the wake of the deadly shooting at Fort Lauderdale-Hollywood International Airport Friday, some have latched onto a particularly baffling gun control proposal: banning guns from checked luggage. The proposal is based on the fact that shooter Esteban Santiago checked his gun in Alaska, before pulling it out of his luggage in Florida.

The Associated Press wrote a piece titled “Airport Shooting Raises Questions About Guns in Baggage.” “Transportation Security Administration rules prohibit guns in carry-on bags, but they allow passengers to ship guns if they are unloaded, put in a hard-sided, locked container that only the owner has the ability to unlock, and placed in a checked bag…” they note. “That means gun owners can’t get to their weapons during a flight but can easily retrieve and load them after claiming their checked bags.”

CBS likewise ran a breathless segment on the rule allowing guns in baggage. In it, Florida Democratic Congresswoman and former DNC chief Debbie Wasserman Schultz hinted that she may push for a change. “We’re going to have to take a hard look once and for all at the unsecured areas of our airports,” she told CBS, as the narration noted that she “plans to review security procedures with TSA leaders.”

To me, this all makes no freaking sense. Checked luggage is only accessible once passengers are in public areas that anyone can walk into. You could pull out a gun from your luggage in baggage claim and open fire. But you could also just walk in and open fire.

AP’s aviation security expert even told them as much. “What’s to stop him from driving to the airport, parking his car, getting his gun and going into the airport and shooting people?” he asked. Nothing in the remainder of the piece rebuts that very basic question.

A ban on carrying guns in checked luggage would have had the exact same effect as existing Florida law designating airport terminals a gun-free zone. Which is to say, it would have none. As best as I can tell, the media– and possibly one of the nation’s most prominent lawmakers– are pushing for a rule that doesn’t actually do anything to prevent airport shootings.

While banning guns from checked luggage would do nothing to stop shootings, it would do a lot to inconvenience people trying to lawfully move their guns from one state to another. Mailing guns is a cumbersome process that requires working with a licensed dealer or collector. Driving requires working out which states and cities will reciprocate and recognize your license, at risk of being thrown in prison. For many, flights are the easiest and only feasible option.

But now those lawful gun-owners will be inconvenienced further for the sake of the desperate need to do anything in the wake of the Friday shooting, even if the benefits are illusory. I understand the need for action, but this proposal in particular makes no sense at all.