India Counters All That Ice with a Rice Bucket Challenge

India Counters All That Ice with a Rice Bucket Challenge 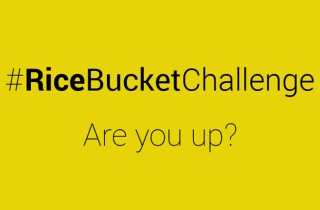 There’s a water crisis going on in India right now, so doing one of those classic #IceBucketChallenges may not be the best idea. (Though several Indian stars and Bollywood celebrities have already participated.) Well, an Indian journalist came up with a different idea on how to make a change: the Rice Bucket Challenge. And no, it does not involve dumping buckets of rice on people. That would be silly and insensitive.

No, Manju Latha Kalanidhi‘s charity push is actually very simple: you cook rice and put it in a bucket or bag of some kind. Then you give it to someone poor and in need. And then you take a picture of yourself doing it, post it on social media, and then challenge other people to do it too.

Kalanidhi explained she came up with the idea because “[t]he idea of dunking oneself in icy cold water, shrieking in horror and then uploading the bizarre video felt preposterous. I wanted to just do something local, meaningful without wasting anything.”

And there’s a Facebook page that’s gotten, as of this posting, over 18,000 likes. The page has so far shared several photos of people talking up the challenge.