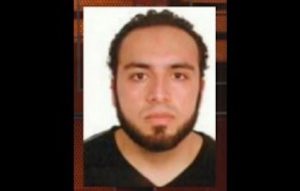 Ahmad Khan Rahami‘s wife is back in the United States, and she has submitted herself to authorities over the alleged violent actions of her husband in New York and New Jersey.

In the days after Rahami was arrested during a stand-off in New Jersey, there was significant intrigue over the fact that two members of his family were in the Middle East at the time of his attacks. Asia Bibi Rahimi was known to have been in Pakistan since June, and during her return trip to America, she was stopped a few days ago by U.S. and Emirati investigators in the United Arab Emirates.

ABC 7 reports that Rahami was seen with federal officials at JFK Airport on Wednesday night, and that she has been cooperative “to a certain degree” with the investigation. Officials stated that her insight would be of “immense value” in breaking down her husband’s motivations and ties to Islamic terrorism.

Investigators are continuing to look into the travels of two other women connected to Mr. Rahami, as well as his mother, who has spent the last few months in Turkey. Rahami’s father has insisted that he didn’t know his son was a terrorist (though he once referred to him as one), and another woman, the mother of Rahami’s daughter, has been given sole custody of their girl.